Come and spend the day at Hospitalfield this autumn in a special weekend event programmed to coincide with Angus Heritage Week and Doors Open week.

TRADE includes the presentation of artist Hiwa K’s video work Nazhad and the Bell; a new print edition, 2018 Year Planner, by Jeremy Deller and Alan Kane; accompanied by talks and workshops reflecting on the ideas within the artists’ work.

* Angus Council will open the Mortuary Chapel to visitors between 11am and 2pm on Saturday 2 September.

2.30 – 3.10pm: Facilitated walk past The Steadings and North Lodge to Western Cemetery and Mortuary Chapel. This event is now fully booked, please click here for alternatives… 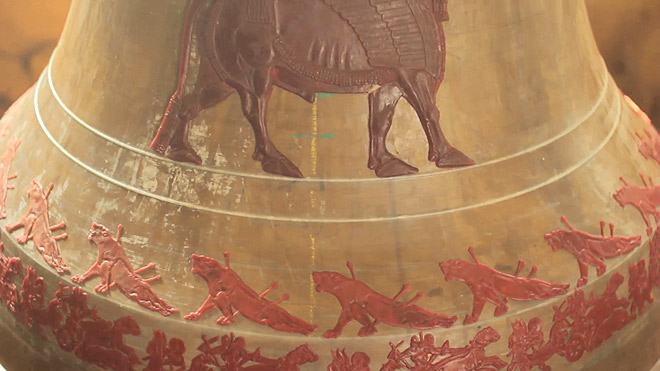 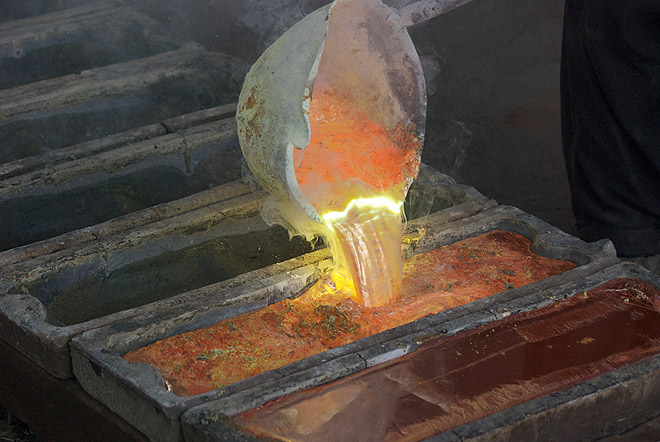 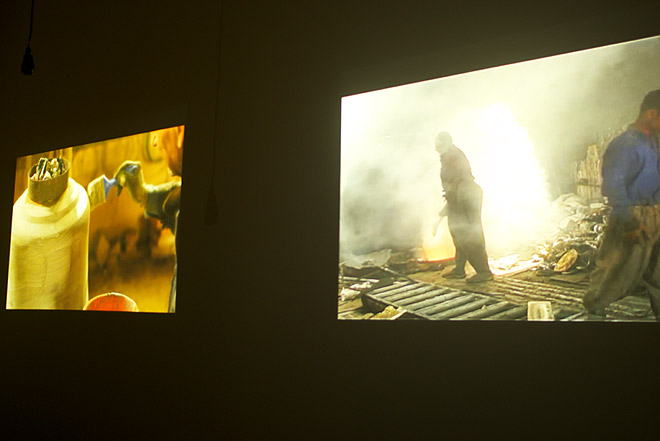 Hiwa K’s work exhibited at Hospitalfield, Nazhad and the Bell, (2012-2015) is a two screen video work. It introduces a highly specialist scrap metal dealer, Nazhad, who has established a business in Northern Iraq to recycle old armaments into metal ingots. The bullets, tanks and mines, which converge in Nazhad’s yard, map the trading links of conflicts including the Iran-Iraq war (1980-88) and the two Gulf Wars (1991, 2003). The collected materials are an unavoidable record of weapons entering and moving around the conflict zones through sales from Europe and connections between allies.

This project connects Nazhad’s yard to master craftspeople in a metal foundry in Italy which specialises in the historic process of bell making. The ex-arms ingots take a new form as a bell: a communication device traditionally central to many communities. As large metal objects, bells were historically melted down to create cannons in times of war. This symbolic community-dismantling process is reversed in the peace-seeking gesture of making a bell out of weapons. Hiwa K also references recent culturally destructive activity within the decorative elements of the bell, by using motifs of Assyrian Gods, similar to those which can be seen on the archaeological artefacts wrecked by Isis fighters within museums in Syria and Iraq.

Images: Hiwa K, Nazhad and the Bell, 2007 – 2015, still from digital video and documentation of video installation. Courtesy of the artist and Prometeo Gallery. Thanks to KOW Berlin. 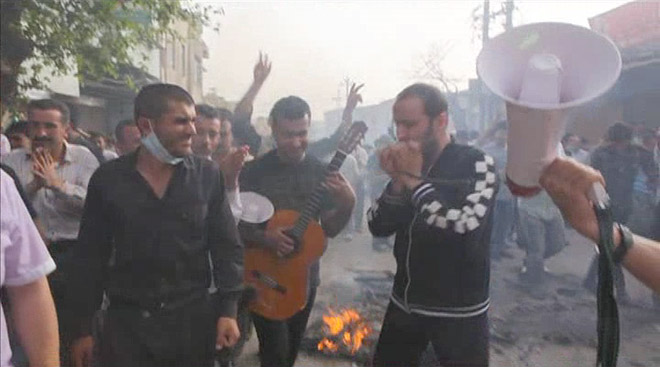 Hiwa K was born in Kurdistan-Iraq in 1975 and lives in Germany. His works in video, performance, sculpture and music draw to our attention to connections within the public sphere. In the past this has been encounters relevant to his personal biography, (Cooking with Mama, 2006); emphasis on public-address through the lyrics of pop songs, (Chicago Boys, 2011) and the tradition of Speaker’s Corner; and shared experiences of politics, protest and trauma, (The Lemon Tastes of Apple, 2011). His practice has developed through valuing everyday experience and learning, oral histories and collective creation.

Over the last year Hiwa K has exhibited in the long running, high profile exhibition Documenta, which happens every five years and this time took place in Athens as well as its home, the central German town of Kassel. He showed a sculpture One Room Apartment, which reflects on the change in Iraqi domestic culture from communal to individual; and a major new video work, Pre-Image (Blind as the Mother Tongue), which sees Hiwa K retracing the route which he took on foot as a refugee, 21 years ago, from Iraq to Europe, arriving in Athens. Over the summer of 2017 KW Institute for Contemporary Art, Berlin presented a comprehensive exhibition of Hiwa K‘s work to date entitled Don’t Shrink me to the Size of a Bullet which will be followed by a project at De Appel, Netherlands. 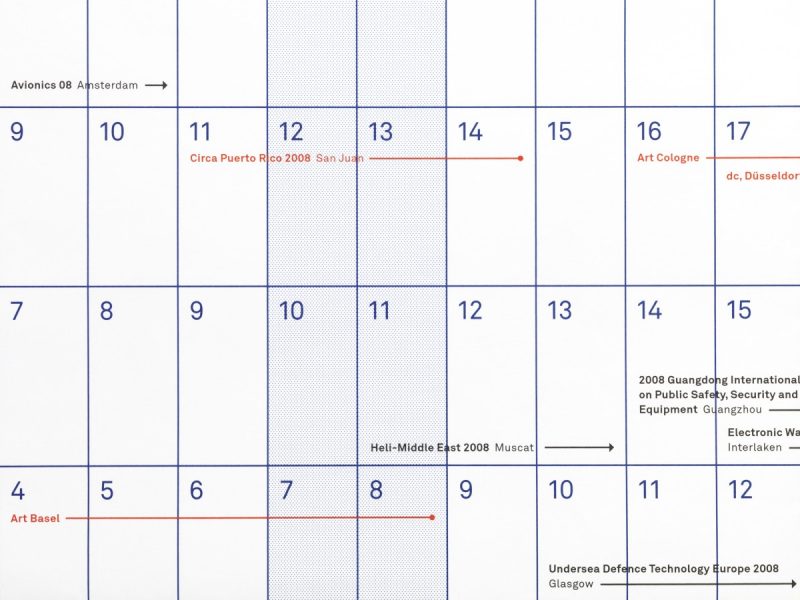 2018 Year Planner by Jeremy Deller and Alan Kane charts the dates of art fairs and arms fairs, within the conventional design of a mass produced office wall planner. The typical national holidays and celebrations for the year ahead are neglected in favour of international fairs trading in weapons and artwork. The project is a return, after ten years, to the artists’ 2008 Year Planner, created for presentation at NADA Art Fair in Miami in 2007 with Bruce Haines and Rob Tufnell from the gallery Ancient & Modern. This useful limited edition print is available for visitors to take away from the exhibition, free of charge, and is designed by the graphic design studio A Practice for Everyday Life.

2018 Year Planner’s surreal or superficial contrasting of ‘creative’ and ‘destructive’ activities, becomes more harmonised when the global movement of money and powerful people is considered and the shared logistics of the two forms of largescale ‘exhibition’ are taken into account. The display of the prints, as a basic stack, puts emphasis on the distribution of information through a daily-used utilitarian object rather than a fetishised work of art.

With thanks to J. Thomson Colour Printers 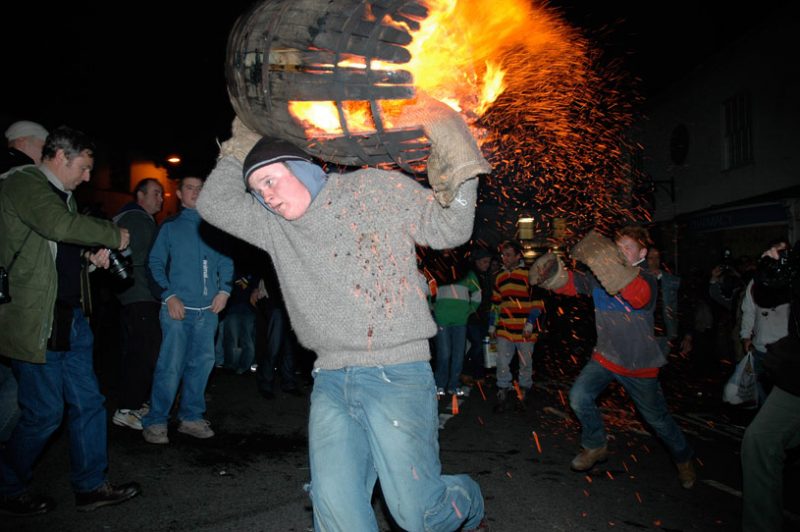 Artists Jeremy Deller and Alan Kane have collaborated on numerous projects over the last twenty years including other artworks which draw attention to, or enable the use of, overlooked cultural objects, traditions and systems.

Their 2004 project, Souped Up Tea Urn & Teapot, created twin urns decorated by a hot-rod spray painter; one tea urn was sold to the Tate gallery and the other donated for use in a village hall near the art organisation Grisedale Arts who had invited the artists to make an artwork which romanticised another culture. For the project, Folk Archive, 2005, the two artists collated over 280 drawings, paintings, films, costumes, objects and examples of political opinion and humour, which provide a snap-shot of the state of contemporary UK folk art, pastimes and pursuits.

Jeremy Deller was born in 1966 in London, where he lives and works. In 2013 he represented Britain at the Venice Biennale with the exhibition English Magic which encompassed socialism, war, popular culture, archaeology and tea; a view of the UK that was both combative and affectionate. Deller’s Sacrilege, a life-size, inflatable version of Stonehenge, was first bounced on by audiences as part of Glasgow International Festival of Visual Art in 2012. An early work, made by Deller in 2001, staged The Battle of Orgreave, where around a thousand veteran miners and members of historical societies re-enacted the 1984 clash between miners and police. It was commissioned by Artangel and Channel 4 and directed by Mike Figgis. In 2004, he won the Turner Prize for Memory Bucket, 2003, a documentary about Texas.

Alan Kane was born in 1961 in Nottingham and lives and works in London. His photography and installation works challenge the system of hierarchies that privilege high art over instances of everyday creativity. For the 2009 Frieze Art Fair, Kane presented Collection of Mr and Mrs L.M. Kane, a display of his parents’ knickknacks that questioned the relative worth of personal treasures over the conceptual objects of the commercial art world. In 2009 he produced five episodes of Life Class: Today’s Nude, commissioned by Artangel for Channel 4, that delivered life drawing classes to people in their living rooms, playing on expectations of TV and art education. To announce the arrival of the British Art Show 8, (a large exhibition which aims to present “a vital overview of the most exciting contemporary art produced in this country”), Kane arranged for a six horse drawn carts to deliver the artworks. His gravestone benches at the same exhibition invited viewers to become participants in the work.