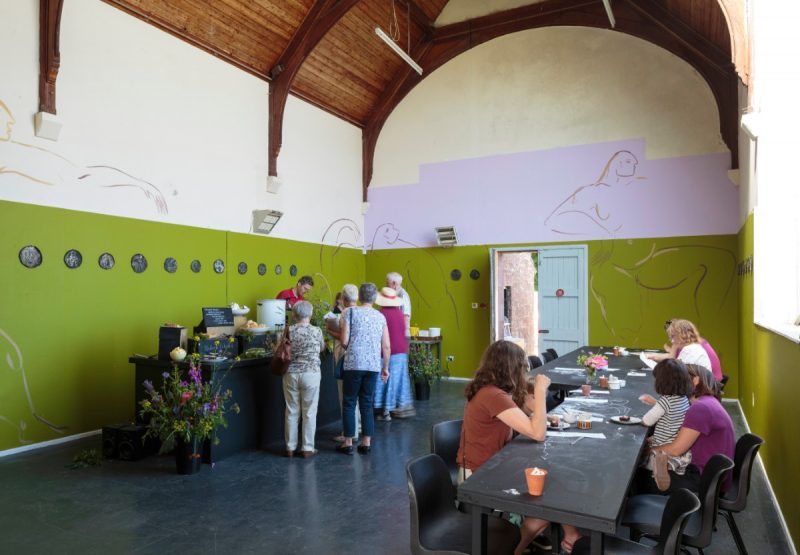 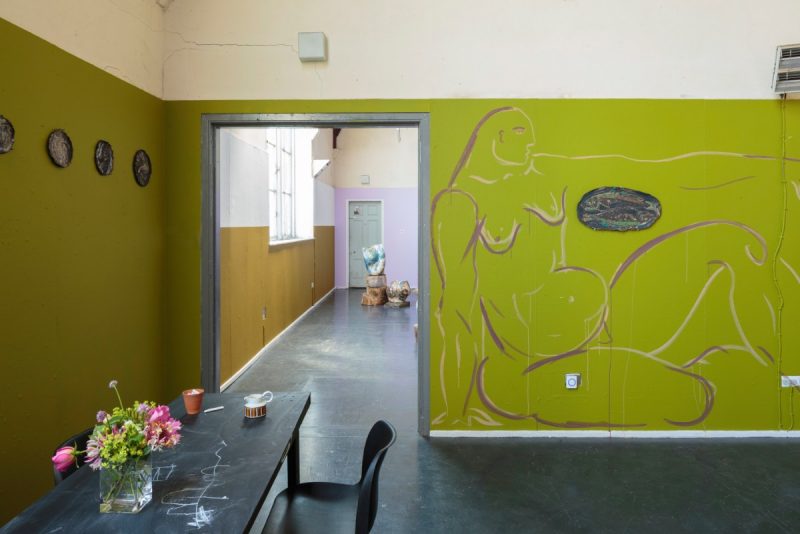 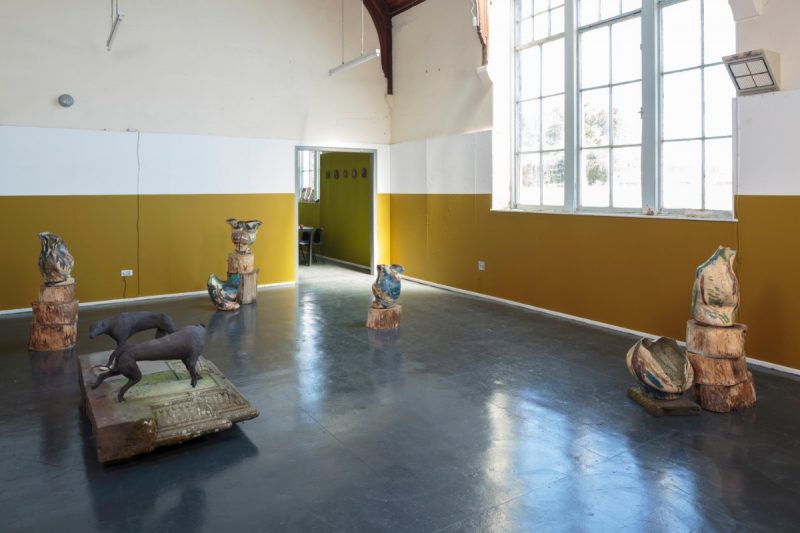 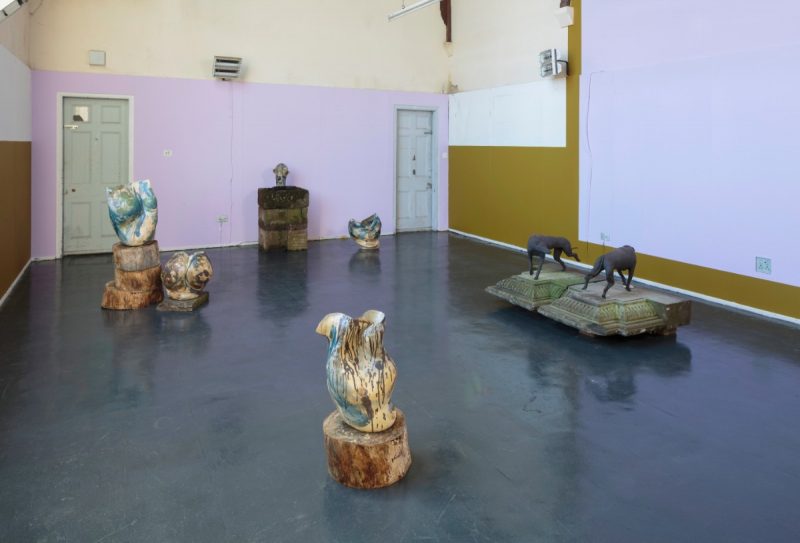 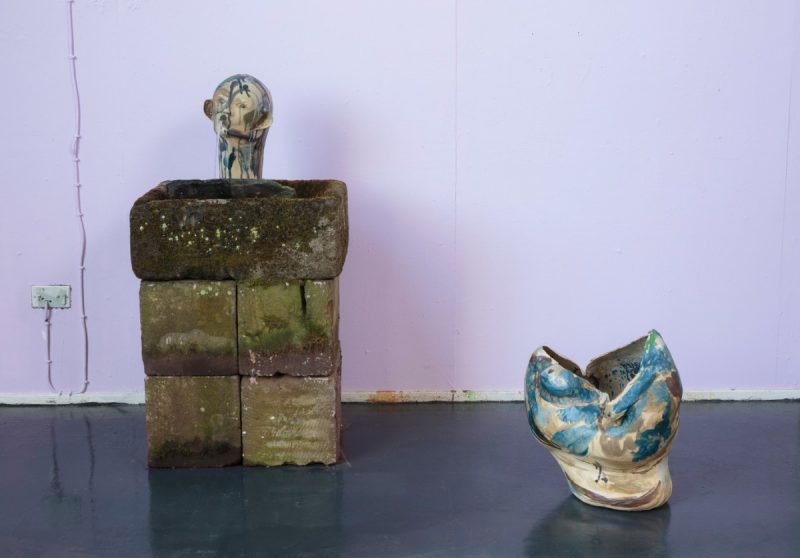 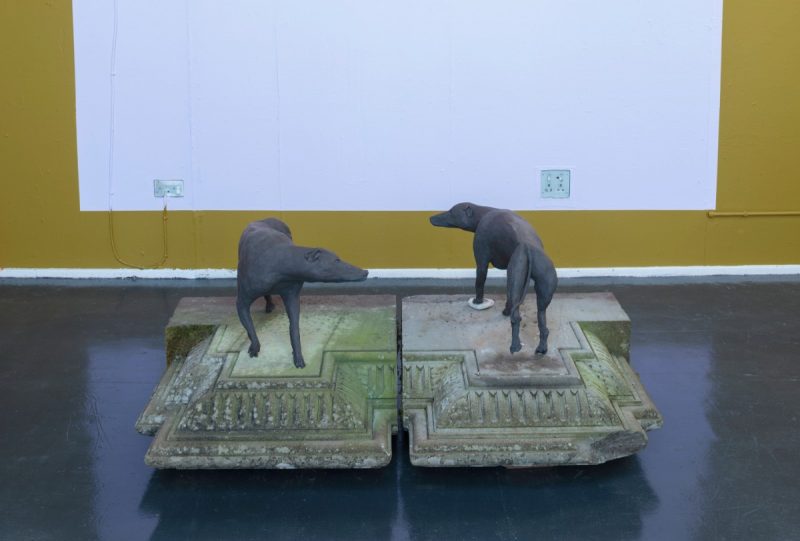 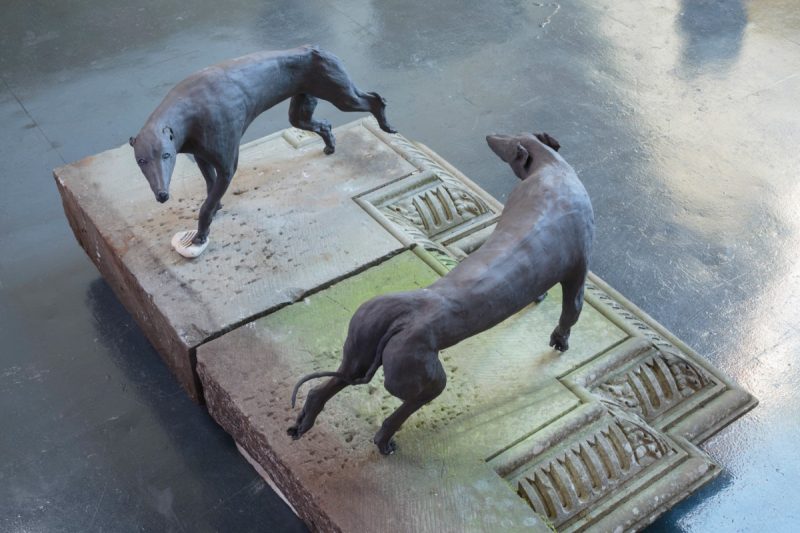 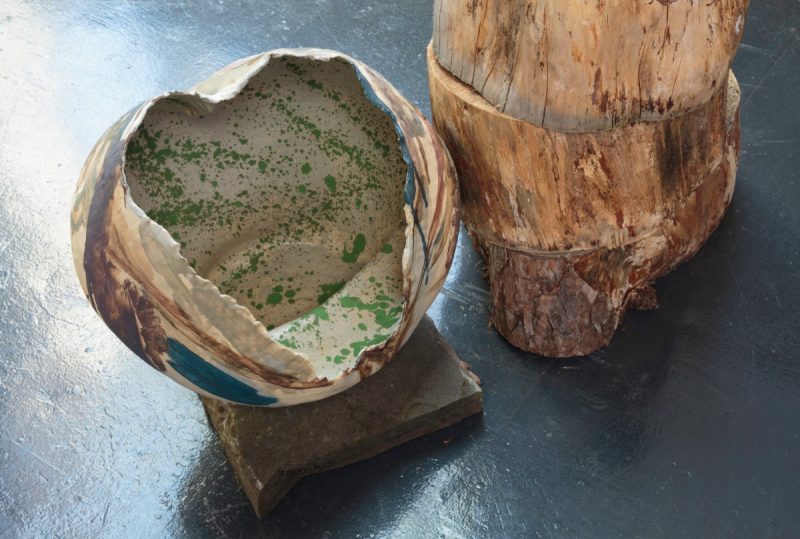 This exhibition took place in two parts. The first space presented a collaboration with Hospitalfield’s chef Simon Brown who designed a menu and served food to visitors who were invited to sit at a long table in a space designed by Zoë Paul. The walls of the studios were painted in green, mustard and lilac reflecting the changing colours of the fields and flowers seen from the windows. Visitors were welcomed into a restaurant environment surrounded by voluptuous figures painted in clay directly on the walls and ceramic plates that have been made by the artist as tests and drawn into and glazed with oxides. The large serving platter references traditional fish plates and depicts two haddock nodding at Arbroath’s famous smokies and a homage to her Scottish godfather who was a fan of the Arbroath smokie and who she used to go fishing with.

The second space opened into a calmer more poetic space; a woodland atmosphere. There was the sound of water trickling into a mossy, carved stone basin from the mouth of an anthropomorphic fountain head – a recurring motif in Paul’s work. Two black ceramic whippets looped each other on vast, carved stone blocks found in the gardens of Hospitalfield house. Rotund ceramic pots were precariously balancing bodies on chopped cedar wood stumps. The cedar from a fallen branch was also found at Hospitalfield.

Paul developed this body of work in thes 19th century drawing studio at Hospitalfield for a month prior to the exhibition. These corporeal vessels were made by stretching lumps of clay out from themselves until the point of collapse, then building them up and finding bodily forms emerge from their slumping shapes. Paul talks about how figure drawing is a way of understanding space through the physicality of our bodies, for her, working in clay becomes like drawing in the third dimension.

Paul’s ongoing engagement in ceramics comes from an investigation into ancient materials and processes. During this residency she began exploring natural oxides and raw glazing techniques, the results of which we can see in these fluid bodily fragments. These ceramic sculptures are dripping and spattered with the glazes which are applied almost blindly as it is not until the heat of the kiln activates the chemistry that the blues, greens and rust browns emerge.

We see here a body of work that is from this place: the carved stone elements have been found on site, the colours drawn from the surrounding landscape. This is a logical response from Paul who has an inherent interest in permaculture. She sees these horticultural processes as a metaphor for healthy, sustainable, resourceful community as having a close relationship to craft; the human act of creating pots from minerals from the earth as an elemental form of the domestication and anthropomorphisation of wilderness.

Zoë Paul grew up between the Greek island of Kithira and Oxford, having South African origins. She now lives and works in Athens. After finishing her undergraduate at Camberwell College of art, she completed her MA in Sculpture at the Royal College of Art, London. Selected shows include: SPIKE Island, Bristol, 2018; Equilibrists organized by the New Museum, New York and the DESTE Foundation, Athens in collaboration at the Benaki Museum, Athens, curated by Gary Carrion-Murayari and Helga Christoffersen with Massimiliano Gioni; Unorthodox at the Jewish Museum, New York, curated by Jens Hoffman and Kelly Taxter.