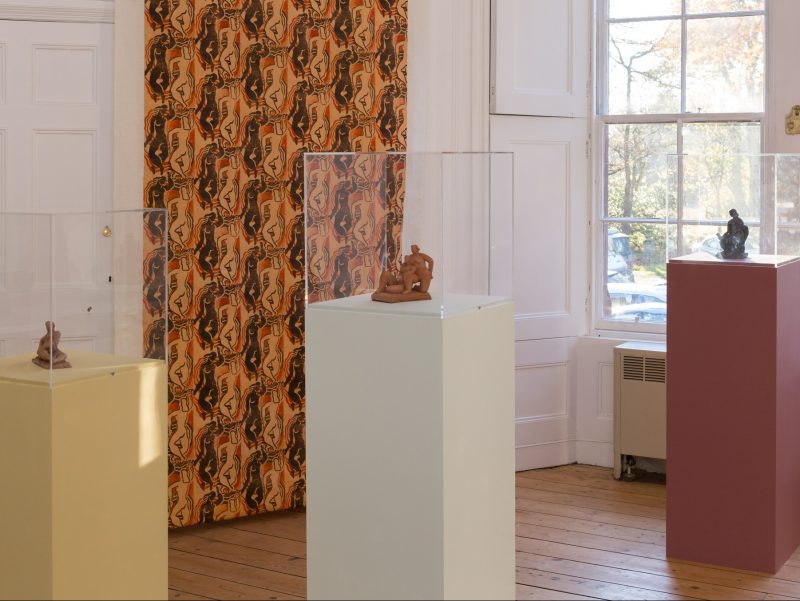 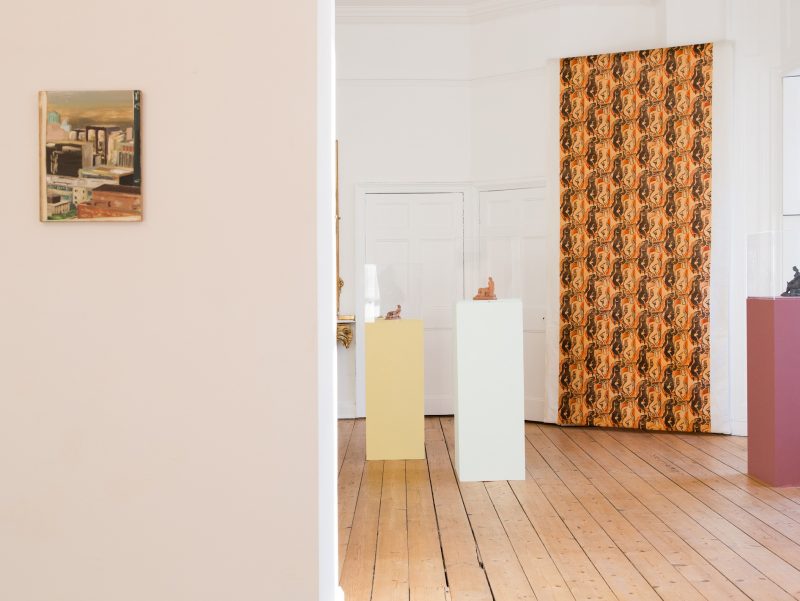 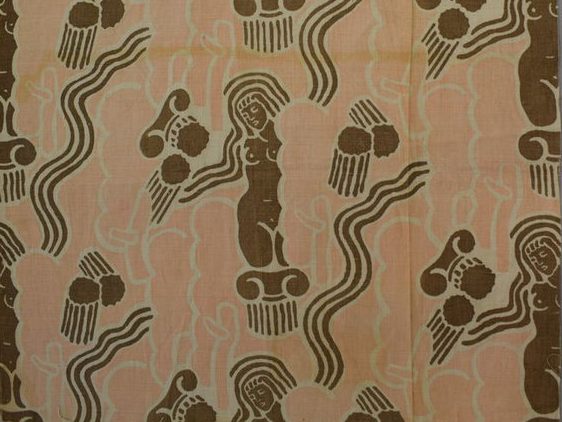 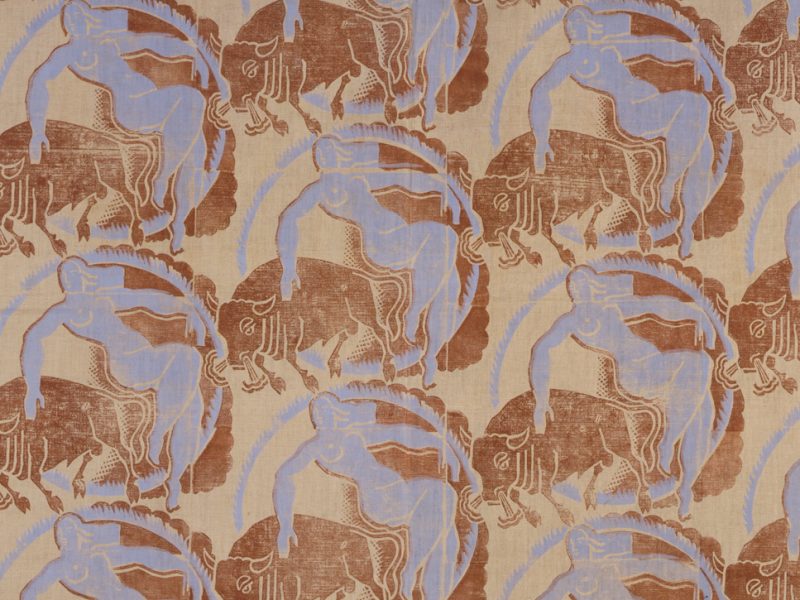 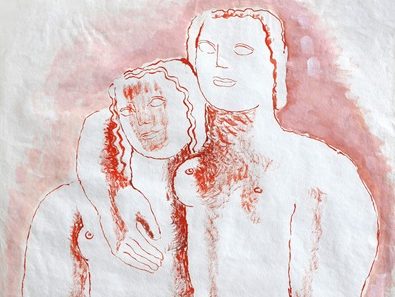 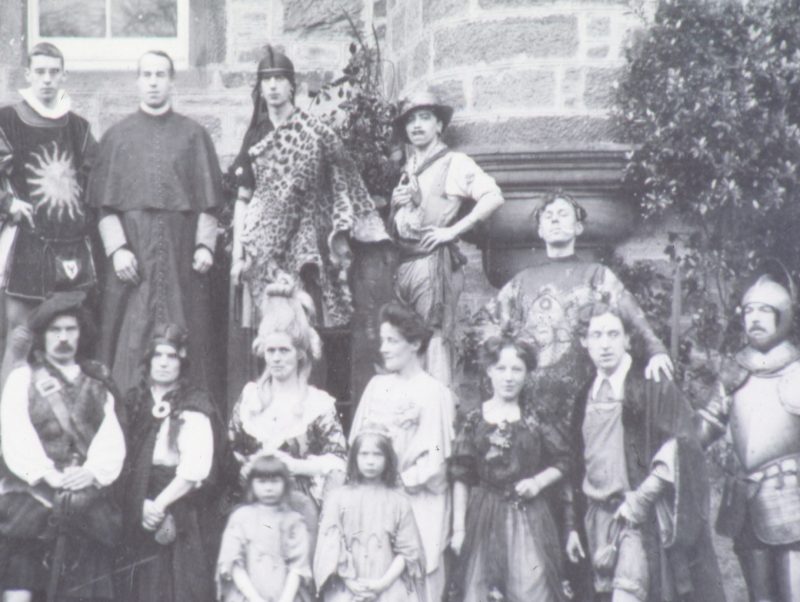 Frank Dobson was the subject of an exhibition at Hospitalfield entitled DUSK in 2016 which displayed examples of his sculptural works and drawings alongside examples of his textile designs made with his wife Mary, exhibited with work of contemporary artists Judith Hagan and Ewan Murray.

Although Dobson’s left is studies at Hospitalfield after only two and a half years of his four-year scholarship he reflected on this time as ‘…the most formative of my life… I tried all sorts of methods of drawing… after a time I began to discover my own style’.

In a report recorded by George Harcourt (Governor of Hospitalfield between 1901 and 1909) in the minutes of the meeting of the Hospitalfield Trustees in September 1908, we learn that Dobson had failed to return to Hospitalfield after the summer vacation of that year and subsequently his place was offered to another student.

Student life at Hospitalfield under Harcourt’s stewardship was evidently industrious and earnest with Harcourt reporting excellent progress with student learning, ‘Students have worked well and enthusiastically and good work has been done’. Harcourt understood however that the young students, whose average age was 18 years, also needed to have some fun. Harcourt records that ‘for the second time, students entertained their friends at a fancy-dress dance given in the Studios’. The first fancy dress party had been held earlier in the same year with a Shakespearean theme, and the second party appears to have been more eclectic as the following image shows; the gathering are all set for the party in their outrageous costumes. Frank Dobson is pictured second from the right, dressed in a black gown and standing beside the man dressed in a suit of armour.

Dobson was born in London, the son of a commercial artist who painted original floral designs for Christmas cards. Dobson attended art classes from the age of 11 years and undertook an apprenticeship under the sculptor William Reynolds-Stephens where he acquired a respect for craftsmanship in design. Dobson was encouraged to take his painting seriously and to seek formal education and he successfully gained his scholarship at the Allan Fraser Art College at Hospitalfield.

In a lecture called The Quest, part of a series entitled The Anatomy of Design held at the Royal College of Art in 1951, Dobson describes at length the growth of his understanding and sensitivity to the multiform nature of art in his early life, dedicating a large portion of the lecture to his time spent a Hospitalfield.

Dobson describes the discovery of methods of learning at Hospitalfield that were entirely new to him, ‘this is where I first really learned to debate properly any matter’.

It was at Hospitalfield that he first began to draw from the life model and was able to bring some clarity to his growing awareness of the sensual and emotional capacity of the form in art. Dobson resisted the dominant influence at that time of Sargent and Raeburn, preferring to study reproductions of Alfred Stevens, Rembrandt and Holbein. In his lecture he says that ‘these drawings said things to me about form which I, as a growing sculptor, could understand: that is, form which had shape and volume, and was not achieved by relations of tone’.

Dobson describes a feeling of joyful drunkenness on seeing a painting by Monet for the first time as part of a Hospitalfield study visit to an exhibition at the Glasgow Institute.

The images below are from a sketchbook used by Dobson during his time at Hospitalfield. The sketches show images made of his fellow students as well as caricatures and imaginary figures.

Dobson returned to London in 1910 where he visited exhibitions that exposed him to new developments in art, he especially recalls seeing Matisse’s The Dance and works by Gaugin. The young artist found it difficult to make any kind of living in London and returned to Newlyn in Cornwall where it was more possible to live cheaply, and he established a studio shared with the artist Cedric Morris. Dobson during this time was still making paintings, his practice having not yet crystallised into any sculptural forms.

Augustus John was also living in Cornwall at the time and on visiting Dobson’s studio encouraged him to exhibit the work in a solo exhibition at the Chenil Gallery in Chelsea, and this is where Dobson first became associated with Wyndam Lewis, founder of the Vorticist art movement.

This influential association with Wyndam Lewis was to be rekindled after Dobson’s return from the first World War, in which he served with the Artist’s Rifles. Wyndam Lewis had established a short-lived collective of artists and writers including William Roberts, T.S Eliot and Ezra Pound which became known as Group X. It was with this collective that Dobson would first exhibit a work of sculpture in 1922 at the age of 36.

Dobson would build on this successful turn to sculpture to build an outstanding reputation for his chosen medium, working in stone, clay, bronze and wood to produce figures. His work grew in ambition and profile during the 1920s and 1930s, when he was regarded as one of the leading pioneers of the modernist sculpture alongside figures such as Jacob Epstein and Henry Moore.

Through his association with Wyndam Lewis, Dobson was introduced to influential circles of intellectuals and critics who championed his work. Dobson had become close with the family of the artist Ben Nicholson who acknowledged the influence of Dobson on his own work.

Frank Dobson worked across a range of sculptural media and was also a celebrated draughtman and watercolourist. During the late 1930s, he ventured into designs for textiles carving woodcuts for patterns that were printed by his second wife Mary Dobson. These modernist designs were overshadowed by his sculptural work, however they remain an important contribution to modern textile design and several examples ore held in the V&A.

Dobson’s sculpture London Pride was commissioned for the Festival of Britain in 1951. In 1987, the sculpture was cast in bronze and sited outside the National Theatre in London’s South Bank near to where it was originally located for the 1951 Festival. In 1963, the sculptor was honoured with his very own civic square. Frank Dobson Square in Whitechapel was established in the year of the artist’s death and was the site of several of the artist’s works, including the sculpted fountain, Woman & Fish, now lost to vandalism.

The Sculpture of Frank Dobson by Jason Neville and Lisa Thompson-Pharoah, London 1994