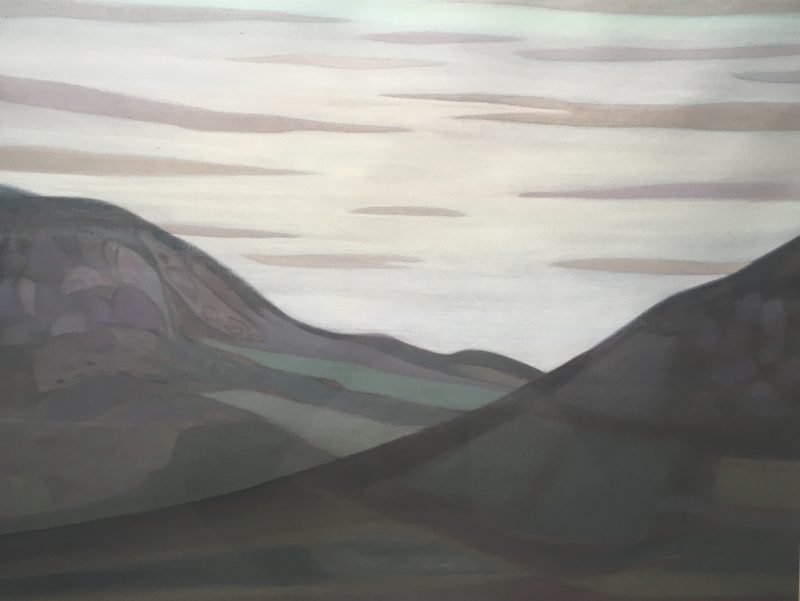 Bet Low was born in Gourock on the Clyde estuary in 1924. Her upbringing has been described as impoverished. Before her eyes she doubtless saw both an unfolding landscape – to the west of Gourock lies the island of Bute, northwards the Cowal peninsula and the stretch of Loch Long and further north the hills of the Highlands – but close to hand there was hard labour: the noise of hammer on steel and shipbuilding.

She left Gourock in 1942 to study at Glasgow School of Art during the early years of the second world war. Her work at this time was predominately figurative – portraits and street scenes. She was a member of the Clyde Group, a loose affiliation of artists based in Glasgow who were politically active and left leaning. She was also involved in Glasgow’s Unity Theatre. Founded in 1941, its aim was to work with and for the working, Low painted sets for its productions.

In 1945 Low headed north-east to Hospitalfield. It must have been, I imagine, brilliantly energising to study at Hospitalfield. The warden at the time was James Cowie (1886 – 1956). A figurative painter who had a brief flirtation with Surrealism, Cowie was a supportive tutor. It was under his wardenship that the artists Joan Eardley, Robert MacBryde and Robert Colquhoun aka ‘the two Roberts’ also studied here. Post-war (Cowie had been a conscientious objector), I like to think their conversations were coloured with optimism and ambition. And here Low found vast skies and wide-angle views that stretched across the North Sea and northwards to the Cairngorms.

Low’s later work is predominately landscape. She travelled frequently to Orkney to paint. And here’s a painting of a yawning expanse that is Hoy, one of the Orkney Isles.

A stretch of seashore, the weighty bulk of hill stitched with hills. That’s brilliance of Low – she suggests the weight of a landscape. She shows how the land, the sea, the horizon can both overwhelm and diminish the individual through scale. But she also offers the possibility to merge into it. Wander into a landscape and there is often a point when one wonders if it will comfort or consume.  Will it offer respite from the enclosed domestic interior or instead defeat us with its depth, its enormity and unruly-ness? Low’s landscapes are empty of people, making them even more seduction to one’s imagination. Here’s the opportunity to wander alone.

In 2009, the contemporary artist Karla Black, who studied at Glasgow School of Art in the late 1990s, exhibited at Inverleith House, a fine 18th century mansion that sits within the Royal Botanic Garden in Edinburgh. Black’s sculptural works are frequently precarious:  suspended contortions of cellophane coloured by rouge and eyeshadow; a construction of sugar paper, that looks as if it may keel over at any moment. One fears one’s breath or even  own slipstream may dismantle the work, cause chaos. But interestingly, here at Inverleith, Black choose to exhibit her work alongside seven paintings by Low.

I remember visiting the exhibition. It was entitled Sculptures with Paintings by Bet Low (1924-2007). I recall clearly the grounded weight of Low’s work. Anchored firmly to the wall, the paintings contrasted boldly and almost bodily with the fragility of Black’s work. They were ballast. If the wind was to whip round the rooms at Inverleith House, Low’s dark and deep canvases would, to a degree, shore up Black’s sculptures.

But both Low & Black explore the ‘lie of the land’. Low’s work is held within the 2-D, Black’s sculptural forms rising up from the floor or hanging down from the ceiling. Their work are earthy manifestations of colour, substance and form of the land that surrounds us, what’s near to hand, what is under foot.

The painting by Low in Hospitalfield’s collection is called Towards Dusk. It’s a watercolour painted in 1977 and exhibited in Low’s solo show at the Compass Gallery in Glasgow the same year. It was acquired by the Scottish Arts Council (SAC) from the exhibition. It was later gifted to Hospitalfield in the late 1990s when the SAC de-accessioned their collection. Even working in watercolour, Low gives weigh to the land. And here in Towards Dusk, one can almost hear the sigh of a landscape: its moan as dusk turns to night.

Susanna Beaumont is a curator and mentor. In 2018, Susanna launched Design Exhibition Scotland (DES), a pioneering project that celebrates exceptional objects and ideas for the everyday. DESign ONline, launched in April 2020 celebrates a wide community of ideas, with the wish to inspire exchange, fresh & free thinking, new possibilities & change.

Image 3: Towards Dusk by Bet Low, The Hospitalfield Trust