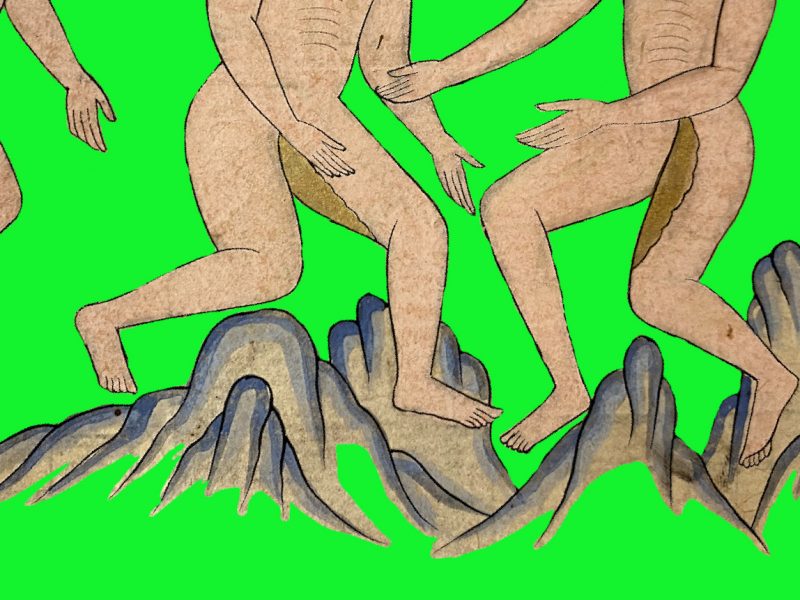 In August 2022, Zaman will present the first iteration of the piece under the working title Rubus. Orientated around rubus fruits (raspberries, blackberries, blueberries), the project takes up a multi-dimensional conversation on the social currencies and economies of modern agriculture. Developed over 2 years, the artist has undertaken extensive research in the region with visits to farms in Angus organised with Angus Growers and conversations with farmers, pickers and scientists at the James Hutton Institute.

This first iteration of Rubus will take place on Saturday 6 August at Beer & Berries Festival and is supported by The Elephant Trust.

Encompassing moving image and performance, the art work invites writers and poets Seán Elder, Nat Raha and Daniella Valz Gen to dialogue with Al Qazwini’s The Wonders of Creation and the Oddities of Existing Things; an influential work of Islamic cosmography from the 12th century. These newly commissioned texts will orientate how relationships to land, configured through capital, are subverted and felt.

This project was initiated in 2020-1 as part of the Hospitalfield’s Studio Time Commissions, supporting artists with funded time to develop ideas and research for new art works to be presented at Hospitalfield. Zaman has extensively researched with cultivators local to Hospitalfield in Arbroath to examine the enduring legacies of colonial capitalist land use and ownership in the UK from multinational monopolies on farming practices and plant patents, to the relationship between the Scottish clearances and plantations in South Asia.

Rehana Zaman (b. Heckmondwike) is an artist based in London. She works predominantly with moving image to examine how social dynamics are produced and performed. Her work speaks to the entanglement of personal experience and social life, where intimacy is framed against structures of authority. Conversation and cooperative methods sit at the heart of her practice. Recent exhibitions include British Art Show 9 (UK touring), Trinity Square Video, Toronto, Boros International Sculpture Biennial, Sweden and Serpentine Projects, London, UK (forthcoming). Her films have been shown at Dhaka Art Summit, Bangladesh, Bergen Kunsthall, Norway; Liverpool Biennial 2018, Kochi-Muziris Biennale 2018; Berwick Film and Media Arts Festival; Sheffield Doc/Fest; SAVAC, Canada; Oberhausen Film Festival, Germany; Whitechapel, London and Bétonsalon Paris. In 2019 she co-edited Tongues with Taylor Le Melle published by PSS and curated The Range, Eastside Projects, Birmingham. She was shortlisted for the Film London Jarman Award in 2019 and her films are distributed by LUX Artist Moving Image.

Angus Growers: Fresh Scottish fruit grown with care
Angus Growers Ltd is a soft fruit producer organisation based in Arbroath on the East Coast of Scotland, in the heart of the traditional Scottish berry growing area. The Company is owned and managed by 17 growers, the majority in Angus, Perthshire and Fife, who grow a variety of fruits and other crops; we market their strawberries, raspberries, blackberries, blueberries and cherries. We specialise in producing fresh fruit for the major supermarkets, shops, restaurants and food and drinks manufacturers.

Dr Nat Raha is a poet, and queer / trans* activist-scholar, based in Edinburgh, Scotland. Her research addresses sexuality and gender, critical theory and Marxism, contemporary poetry and poetics, through creative and critical methods.

Seán Elder is a curator, researcher and writer from the Scottish Highlands based in Birmingham, UK. They have worked with artists to develop events, writing and exhibitions for organisations including Jerwood Arts (London); BALTIC 39 (Newcastle); Grand Union (Birmingham); LUX Scotland (Glasgow); The WorM (Aberdeen). Previously Associate Curator at Grand Union, and Writer-in-Residence at Cooper Gallery, Duncan of Jordanstone College of Art and Design, Dundee, in 2020 their project ‘The Birmingham Critical Film Forum’ was awarded the inaugural Stuart Croft foundation curatorial award.
Daniella Valz Gen is a poet, artist and card reader. Their work explores the interstices between languages, cultures and value systems with an emphasis on embodiment and ritual, through the mediums of performance, installation, conversation and text. Valz Gen is the author of the poetry collection Subversive Economies (PSS 2018). Their prose has been published in various art and literary journals such as Lish, SALT. Magazine, Paperwork Magazine and The Happy Hypocrite amongst others. They’re currently developing the next stage of their project (be)longing, a series of immersive elemental rituals. Valz Gen has been focusing the last two years on integrating their oracular practice with their art and poetry. They run monthly gatherings exploring poetics in relation to the symbolism of Tarot cards within the container of Sacred Song Tarot.