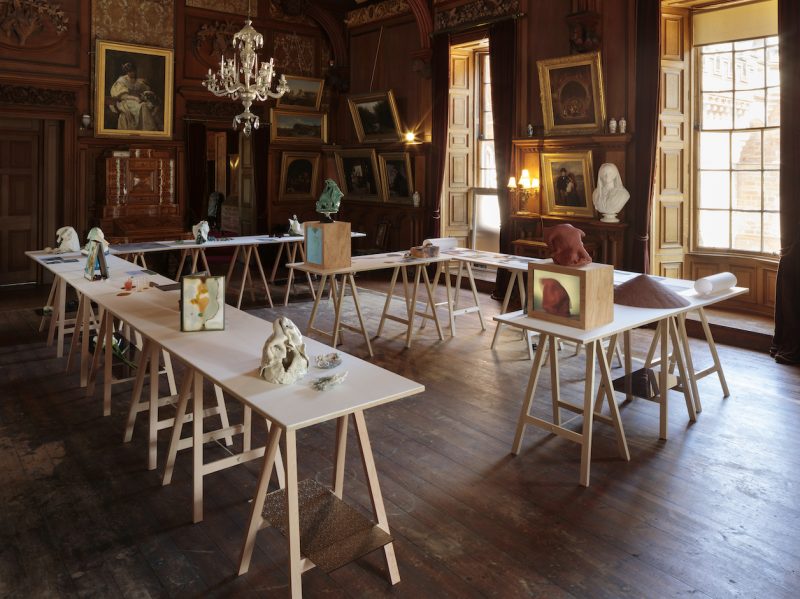 The Judges lll (2012), a major work by artist Christina Mackie, will go on show this summer at Hospitalfield as part of a programme of exhibitions and commissions taking place across 2021 which visitors can enjoy alongside the newly restored fernery, glass house cafe and gardens and series of outdoor artworks by Mick Peter.

The opening of The Judges lll marks the first time this year that Hospitalfield House is open to the public for tours (access by appointment in small groups).

The work by Mackie is a sculptural assemblage featuring materials ranging from biomedical data and geological field-research to watercolour techniques and artisanal sculptures. Within the installation, minerals unfold as paint, as slip, as clay and as glaze and piles of mineral sand, which are funnelled and poured, flowing between objects. This major work is on loan from the collection at Nottingham Castle Museum and Art Gallery and will be installed in the Picture Gallery at Hospitalfield, inserting itself into the Victorian collections.

The key image that informs the work is a set of massive brooding stone outcrops suggesting the character of judges. Through this work Mackie explores the concept of judgement and its role in all our lives. A powerful controlling force whether one is the judge or the judged. The Judges III was conceived by Mackie based on research into the Nottingham Museums and Castle Museum collections: Geology, colour, the concept of “collection”, the handmade, history, the 20th century interwar period paintings. Best characterised as arrangements rather than installations, Mackie’s works are occasionally punctuated with simple, unaltered functional objects from her immediate environment.

‘’I first saw the amazing Painting the Weights, a work by Christina Mackie at Chisenhale Gallery in London in 2012. She went on to be commissioned by Nottingham Castle to make a major new work for their collection.We are delighted to have been able to borrow Judges lll from Nottingham Castle and to work with Christina and the Museum’s curator Abi Spinks to instal this complex work at Hospitalfield. There are many astonishing works in the collections of museums around the UK that can be shown more widely and we are very much looking forward to welcoming visitors to see this work which transforms the Picture Gallery”, says Lucy Byatt, Director, Hospitalfield.

Alongside the installation by Christina Mackie, visitors can also see a major new outdoor art work by Mick Peter, Gerroff! (or User Feedback), the first of a series of new artist commissions to be unveiled in 2021.

Meanwhile, a new work by artist Sally Hackett is now open to view from dawn until dusk in the grounds of Hospitalfield. The artist worked with over 400 children from Timmergreens and Muirfield Primary Schools to imagine their dream ‘therapet’: an imaginary pet with magical abilities to look after, comfort and generally make each child feel better. Through weekly workshops over six weeks at both schools, artist Sally Hackett has created this graceful sculpture, much like a fairground carousel, which combines the wonderful dream therapets conceived and painted by the children. It is now installed around a grand old tree within Hospitalfield’s grounds.

Sally Hackett is an artist and educator living and working in Glasgow. She makes sculpture with a range of materials of widely different shelf lives and sell-by dates from glazed ceramics to peanuts, garlic husks and toilet rolls. Spurred by intuitive making, her work is predominantly around emotion and mental states.
New glass-house cafe and history fernery ready to view in the summer sunshine

Hospitalfield plans to restore key elements of the iconic site with a Future Plan over the next five years and have now unveiled a new garden and restored 19th century fernery and a glass house café. In response to the 800 year horticultural history of the site at Hospitalfield, it sits alongside the newly restored fernery and glass house cafe designed by Stirling Prize Winning Architects Caruso St John, their first project in Scotland. The cafe run by award winning chef Simon Brown will serve locally sourced menus and produce grown and harvested in the garden. Cafe interiors have also been designed by artists, including a new series of table tops by Mick Peter in collaboration with ThreeFourFive Furniture. A newly developed garden now also sits inside Hospitalfield’s distinctive double Walled Garden, designed by Nigel Dunnett, now in full, summer bloom.

Lucy Byatt, Director, Hospitalfield, said, “We are thrilled to be opening our house for the first time this summer, and to welcome visitors on the occasion of Christina Mackie’s first exhibition in Scotland. This is the first time that this major art work has been exhibited anywhere outside of Nottingham and we are delighted to be exhibiting it during what is set to be one of our most vibrant summers at Hospitalfield to date. I look forward to visitors engaging with Christina’s work, alongside Mick Peter’s outdoor sculptures, and the charming collaboration between Sally Hackett and local school children, and taking time to enjoy our new cafe and restored fernery”

About Hospitalfield:
Hospitalfield in Arbroath on the east coast of Scotland runs a highly regarded programme of residencies, commissions and events that focus on contemporary art and ideas alongside a programme that links to the 19th century historic collections and archives. The vision of the 19th century Scottish artist Patrick Allan Fraser, Hospitalfield is one of Scotland’s most important Art and Crafts houses. In 1902 the house was left in Trust and was established as an art college and then post graduate art school. The story of Hospitalfield is tightly bound to the story of Scottish art history through the art college and the fellowships and residencies that took place throughout the 20th century which included artists such as James Cowie, Joan Eardley and many other familiar names within Scottish modernism. Today Hospitalfield’s cultural programme, designed for a wide range of audiences and working between the heritage narratives of the site and contemporary cultural programming, is anchored in the visual arts yet encourages interdisciplinarity. We maintain strong national and international working partnerships with the aim of making Hospitalfield a meeting place and cultural catalyst in the working lives of artists and creative professionals in Scotland and far beyond.

Christina Mackie (b. 1956, Oxford) is a Canadian artist based in London. Mackie’s work is a combination of making and appropriating. The things Mackie makes – ceramics, watercolours, collages, assemblages, videos, photos, computer-generated graphics – openly fraternise with the quotidian. Best characterised as arrangements rather than installations, her works are occasionally punctuated with simple, unaltered functional objects from her immediate environment. Mackie’s preoccupation with objecthood is coupled with more rudimentary considerations of matter and materiality, a key characteristic of which is colour. Testing the capacities of materials such as crystals, clay, garnet sand, dye and pigment blocks against forces of compression, gravity, technology or sheer observation, Mackie’s practice circumvents conceptual strategies and turns towards an investigation of the world of things and its interconnections.
Mackie has had major solo exhibitions across the UK at Tate Britain, Henry Moore Institute and Chisenhale Gallery. She is represented by Herald St Gallery in London and Catriona Jeffries in Vancouver.
About The Judges III

Mick Peter’s playful installations incorporate imagery influenced by illustration and commercial art. His sculptures are often enlarged drawings, used to animate the narrative of his exhibitions which satirise the symbols of power and authority as well as art making itself.

Mick Peter collaborated with ThreeFourFive on the fabrication of the works to be shown.