Negotiating and inspiring young people through a programme that establishes an interplay between heritage, history and contemporary cultural practices.

Imaginative thinking inspired by the extraordinary collections and programmes.

Hospitalfield’s work with schools is characterised by:

– Meet the Artist models
– Building confidence in pupils and teachers
– Discussing and developing ideas across disciplines
– Making something you’ve not made before
– Following approaches and processes which are successful for artists (collaboration, activism, DIY, performance to camera and more)

Hospitalfield has built strong relationships with the primary and secondary schools within walking distance, and with the other schools in Arbroath and surrounding area. We encourage any school to get in touch to discuss joint projects and visits. 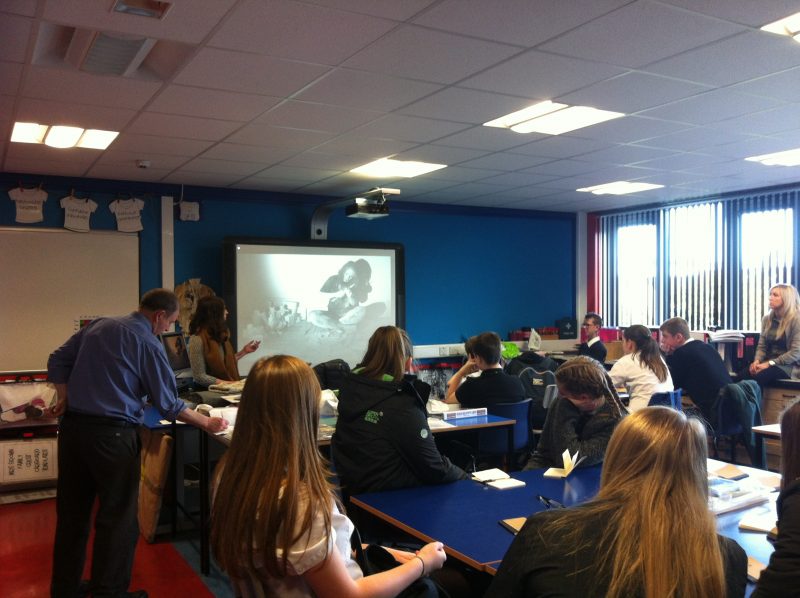 In 2016 we initiated a new programme Live from Hospitalfield which took place at Arbroath Academy during term time.

It takes the form of short illustrated talks within the classrooms, speaking to pupils from a variety of year groups. As a starting point, the artist answers a series of questions about their lives and work and shows images of their past projects or experiments in the studio.

Isabel Cordeiro (Netherlands) and James Rigler (UK) have also done practical workshop sessions with the pupils. Rigler’s workshop was part of a commission for THE DANCING STONES Autumn Season and was supported by Craft Scotland.

This series comes out of a collaboration with educators in the region and an aspiration to offer diverse examples of creative lives. We are continuing to build on these relationships to plan for Hospitalfield Free Drawing School. 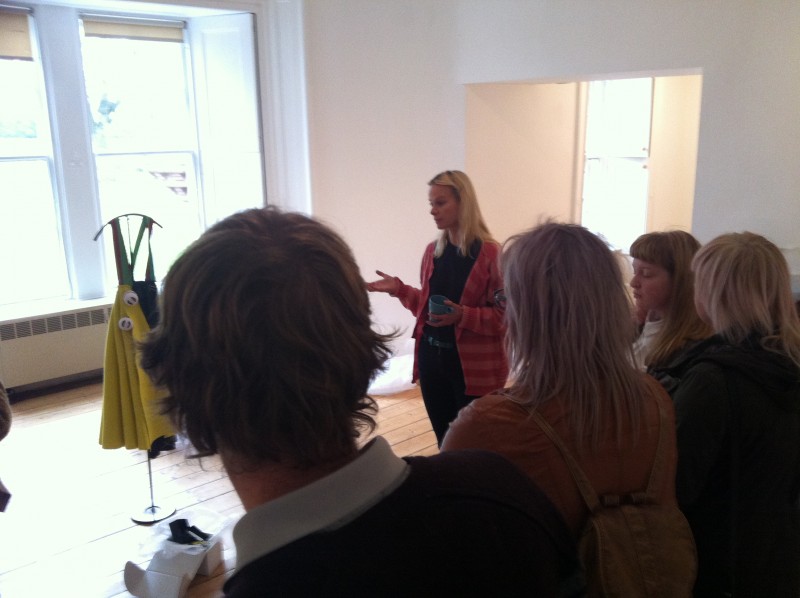 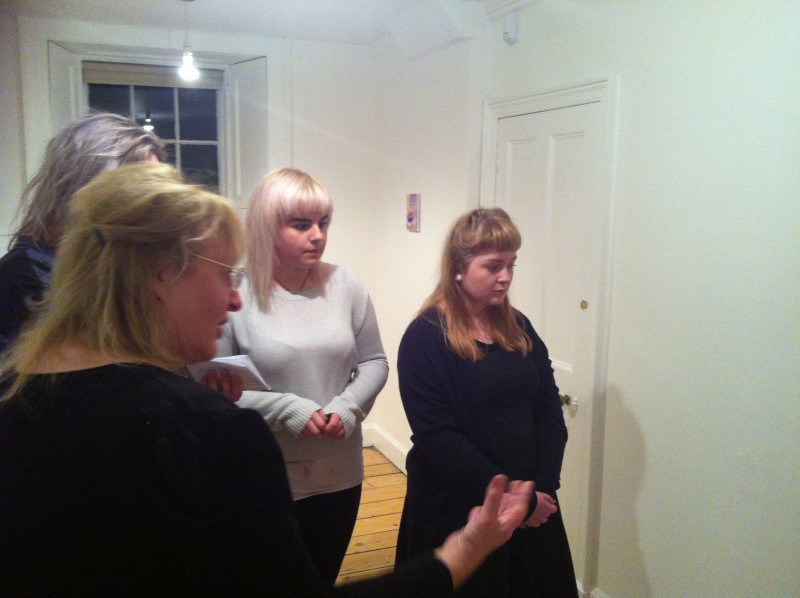 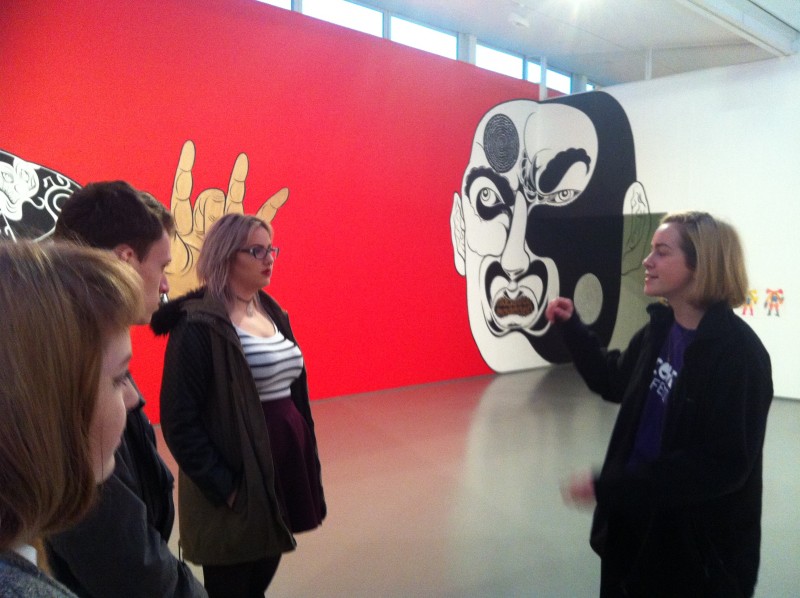 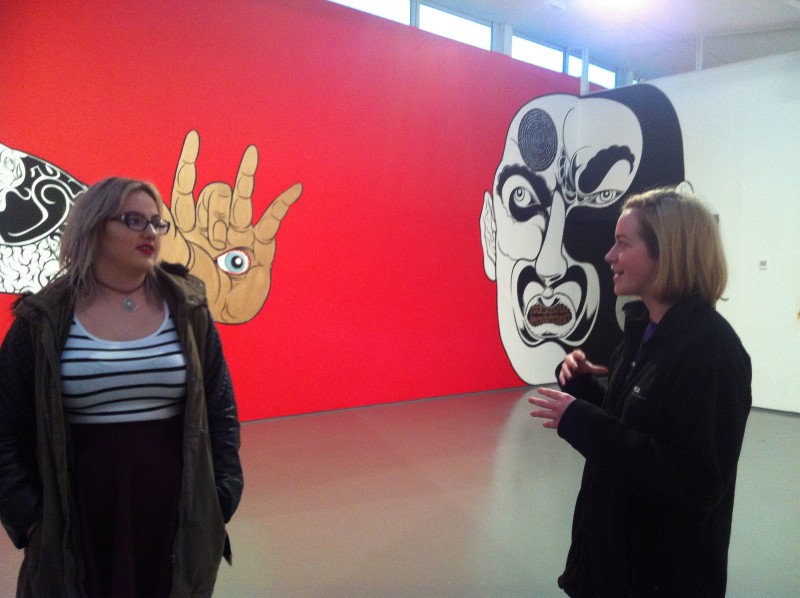 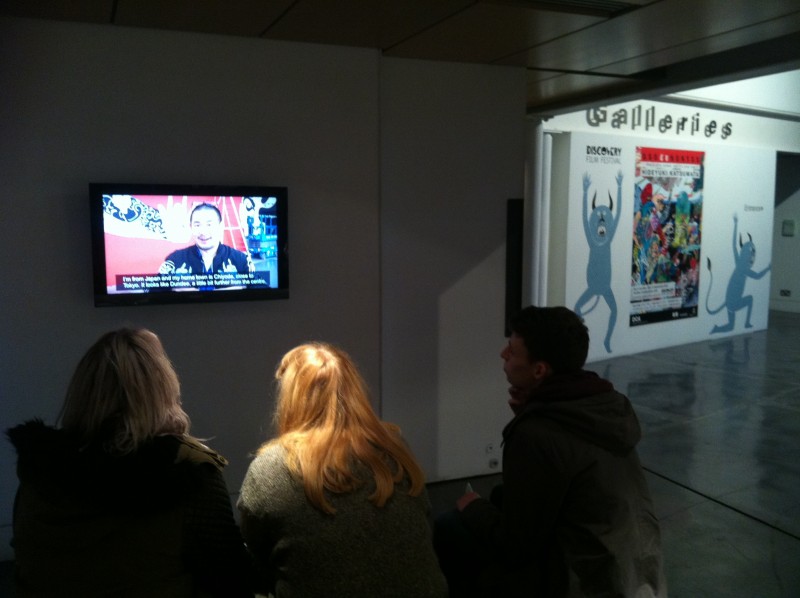 For the CONTINUUM exhibition in November 2015 Hospitalfield worked with Arbroath Academy to bring four senior pupils into the process of making the exhibition, working with the artists and hosting audience in the show.

Erica Low, Rowan Small, Justyna Tkacz, Ross White met with staff, researched the artists, met artist Vikki Morton and artist and educator Joyce Cairns to ask them about their work, received training about hosting the audience, met other young gallery assistants and invigilated the exhibition during the four week run.

While invigilating the exhibition Erica, Rowan, Justyna and Ross were in charge of welcoming the visitors, introducing them to the exhibition and answering their questions. 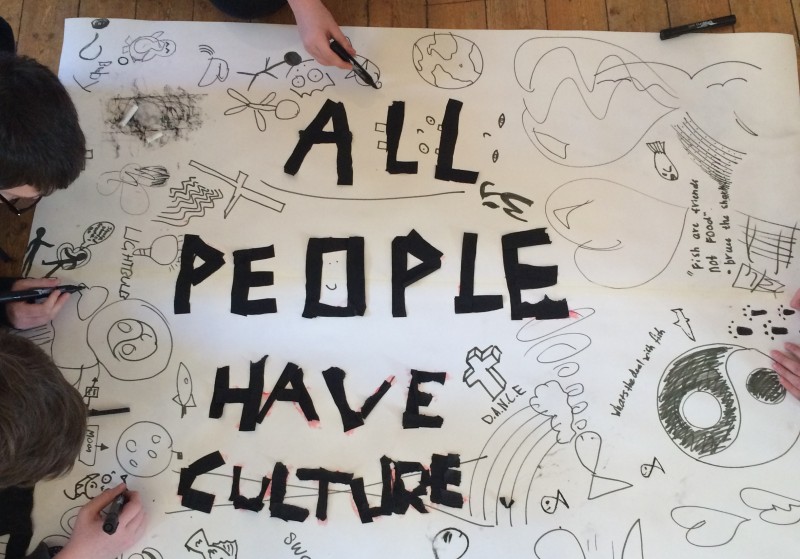 The Arbroath Template is a project devised by the artist Bob and Roberta Smith which started with a series of conversations with teachers in Angus in October 2014. Over a six month period Hospitalfield and a core group of artists activated the project by holding school and college group workshops to experiment with making and sharing inspiring images. The images created are all part of an open online collection which can be viewed here. Full documentation of the project is also available here. 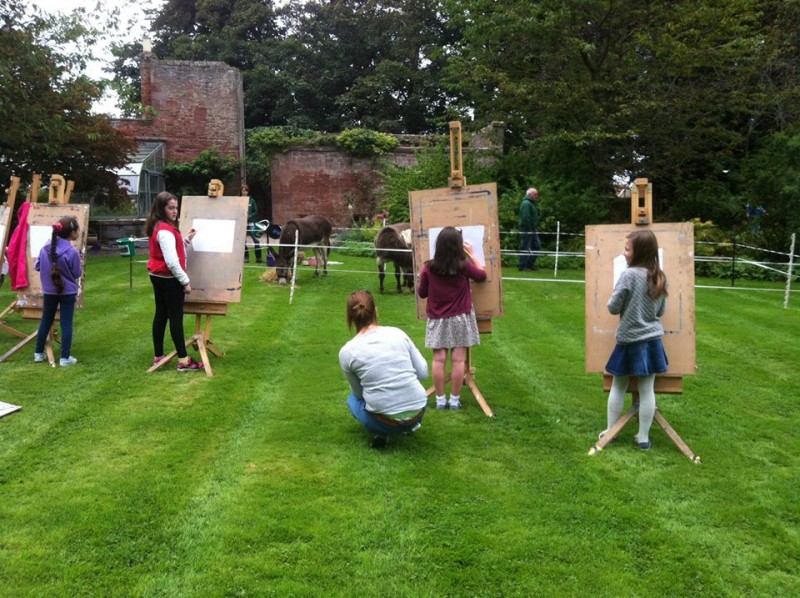 All school pupils at Timmergreens and Muirfield Primary Schools were invited to our Re-enactment of William Kidd’s Donkey Drawing Class which was part of our Autumn Season weekend which drew out the stories of two artists represented in the collection and archive at Hospitalfield: William Kidd and William Calder Marshall.

Although open to all we devised this as a direct invitation to the pupils we had engaged with during school hours as something they could follow up with their families at weekends. 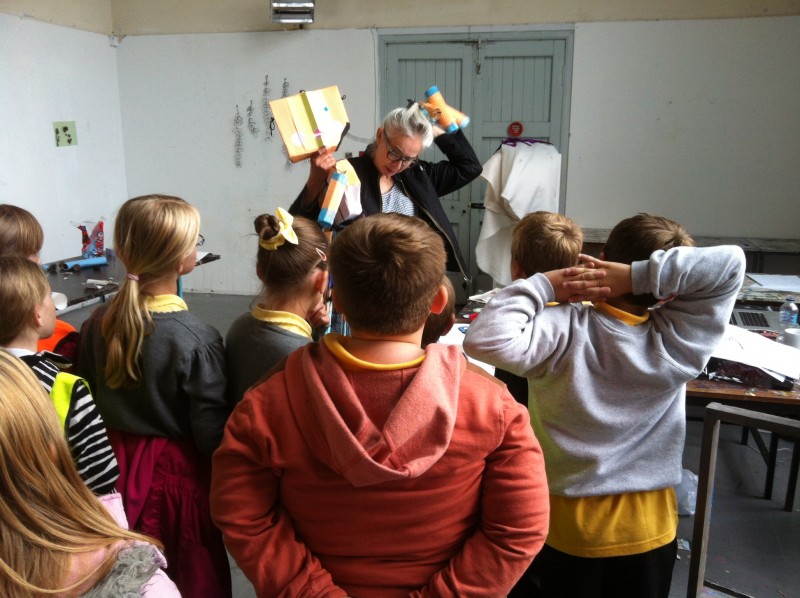 Canadian printmaker and sculptor Libby Hague did a series of performance workshops with classes from Muirfield and Timmergreens Primary Schools. She invited the groups to work with her to learn and rehearse a performance to camera which she was working on to teach a puppet ‘how to be a better person’ taking the revelations about justice within King Lear’s soliloquies as a base for the language.

‘This is the best school trip ever!’ P6 pupil. 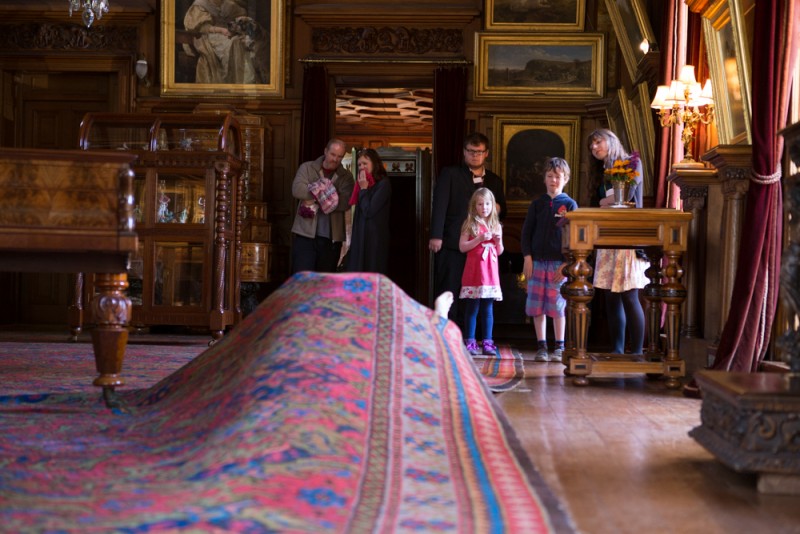 Ellen Wilson worked with artist Claire Barclay and choreographer Janice Parker during the Spring and early Summer of 2014 getting to know their work during the series of mini-residencies they under took while developing their project Underside \ Disturbance. She learned about their respective practices, the process of collaborating and how the project fits with the overarching GENERATION – 25 Years of Contemporary Art in Scotland programme.

One of Ellen’s most important roles was as an aid to Claire and Janice when they were in performance during the Summer open weekend and to help the audience to interact and enjoy the work.

Since completing the work placement Ellen has been recognised for her achievements by her school and has been through a highly competitive national application process to be selected for the Youth Arts Advisory Group for Scotland. 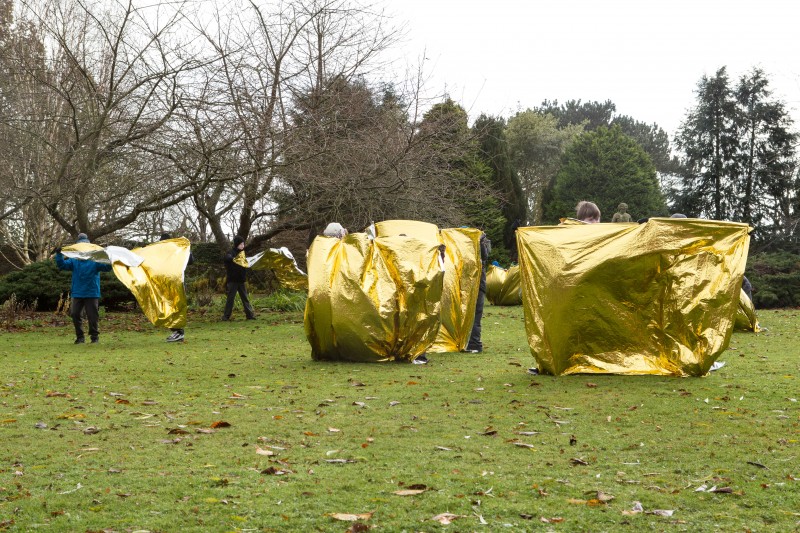 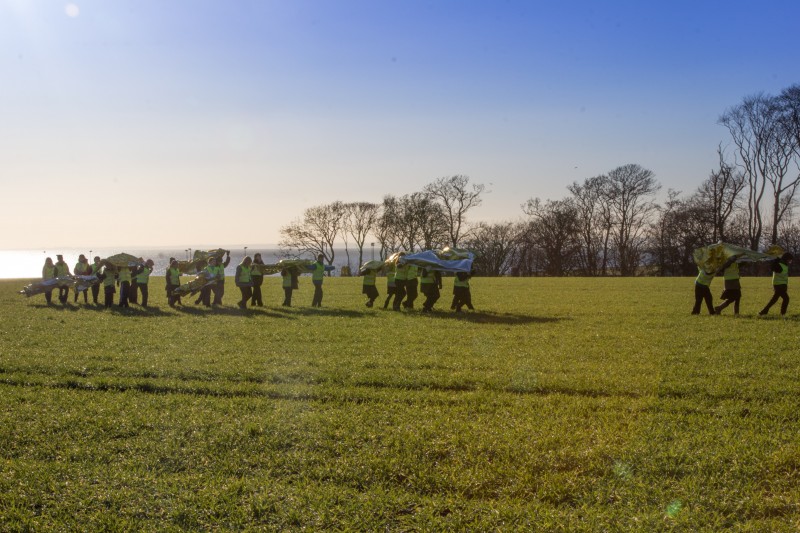 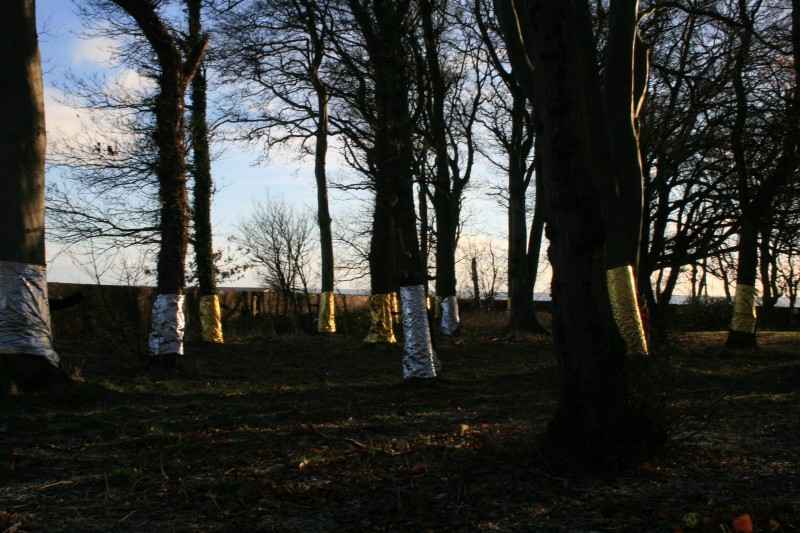 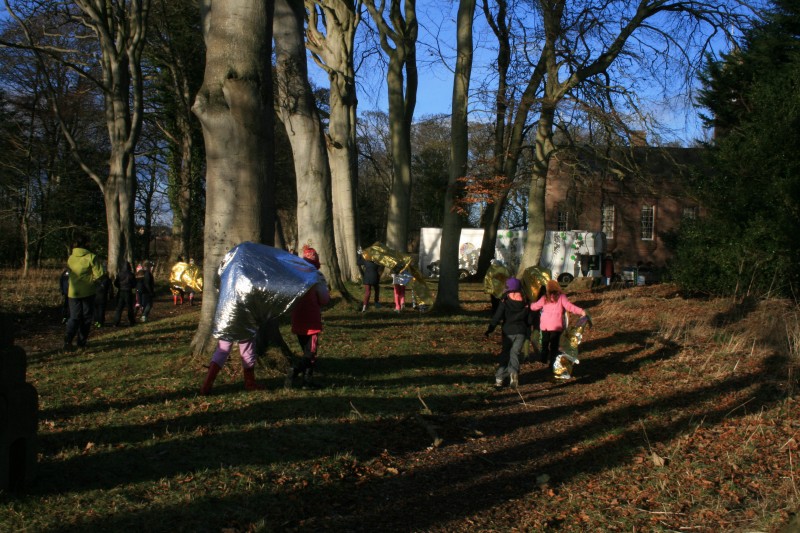 THE VIEW - OF LAND AND SEA

Performance to camera – 140 pupils from Muirfield Primary School and Timmergreens Primary School. Part of the focus of our programme around THE VIEW was to ask the children to consider land art and documentation, thinking about the framing and scale of their own presence in the landscape. 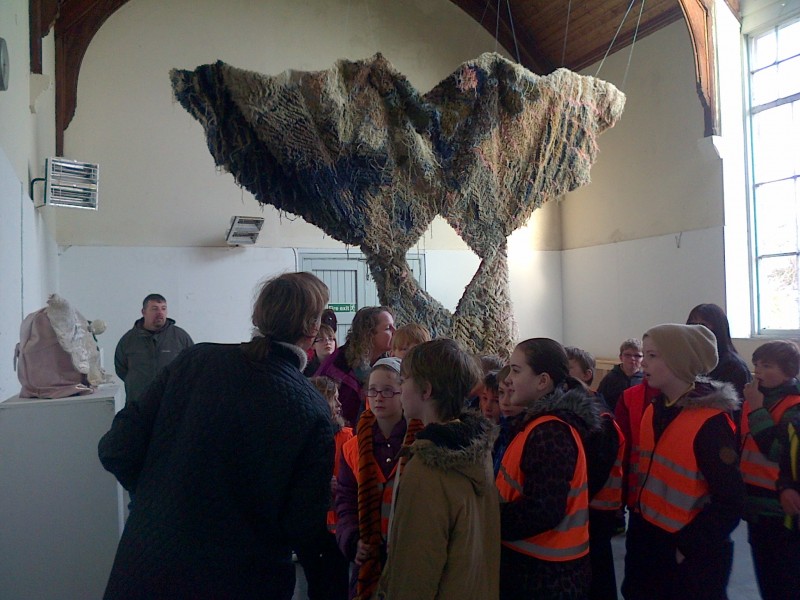 Caroline Achaintre and Laura Aldridge were commissioned to make new presentations of work for our Spring Open Weekend in 2014. Both artists met with local primary school children while they were installing their work. Caroline Achaintre was able to answer questions on the processes and ideas behind her fabric and clay sculptural works which were installed in the Studios and Laura Aldridge was able to speak about her residency at Hospitalfield the preceding year and the installation she had made for Hospitalfield’s Walled Garden.