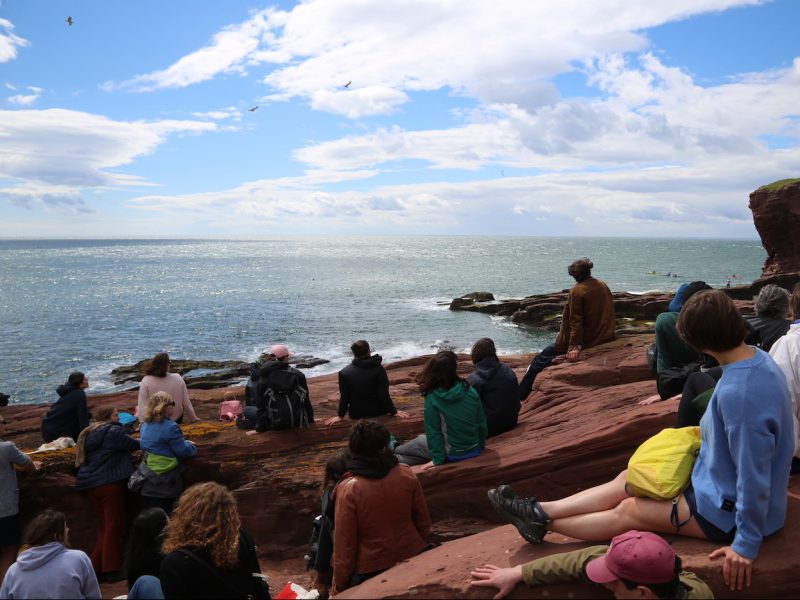 After missing a year in 2020 we warmly welcome you to this annual mostly outside event; camping, eating well and participating in this experimental programme of collective learning.

Now What: A Living Newspaper

Scoring a Living Newspaper
An option to join an online event in the run up to Fieldwork
Saturday 31 July 10am – 1pm, & Sunday 1 August 10am – 2pm
Writing Workshop over zoom led by writer and editor Laura Haynes.
Free to attend. Book your place

FIELDWORK International Summer School returns to Hospitalfield on site through a participatory programme of workshops, talks and performances focussing on The Living Newspaper.

The Living Newspaper, ran in the USA from 1935 – 1939, as part of the federally funded arts program established under the Works Progress Administration under President Roosevelt’s New Deal. This was the white heat of the depression after the Wall Street crash in 1929 and this approach to theatrical performance rejected the conventions of Broadway Theatre, and instead encouraged social justice through the telling of stories of the day. With its roots in earlier European theatre, the programmes that emerged were ambitiously scripted productions which focussed on contemporary conditions such as housing, labour, disease and social stigma. It was disbanded by the US Government in 1939 after it was deemed too political by the Un-American Activities Committee.

The programme brings us together to focus on all the parts of the Living Newspaper production process; writing, costume and prop making, performance, videography and reflection.

The Programme includes a keynote presentation from choreographer and performance artist Ania Nowak, costume making workshop led by set/costume designer Anna Orton and costume designer Alison Brown, filming and editing workshops led by artists Bik Van der Pol and a presentation and discussion with artist and writer Morgan Quaintance. With more details of the Programme to be announced.

In the lead up to the Summer School, we are hosting an online two-part writing workshop titled Scoring A Living Newspaper led by writer and editor Laura Haynes. The intention of the workshop is to create scripts and scores to be used in the Summer School.

Find out more and sign up to attend:
https://hospitalfield.org.uk/visit/events/fieldwork-international-summer-school-2021/