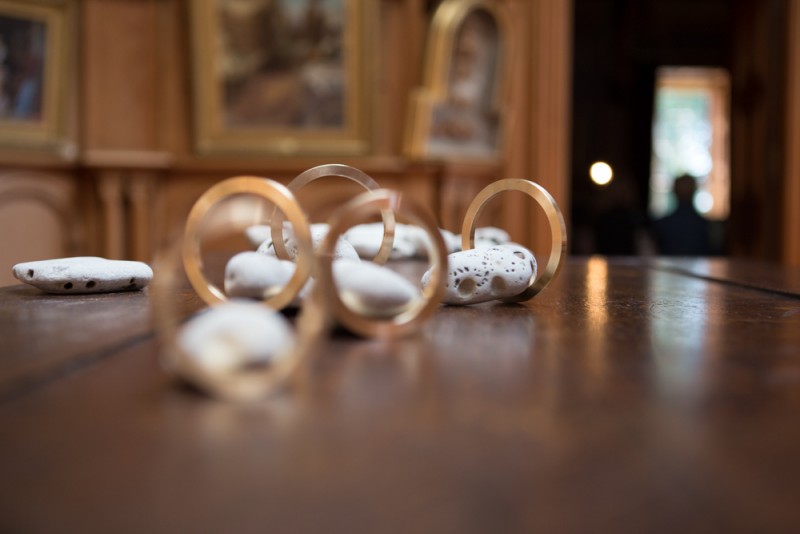 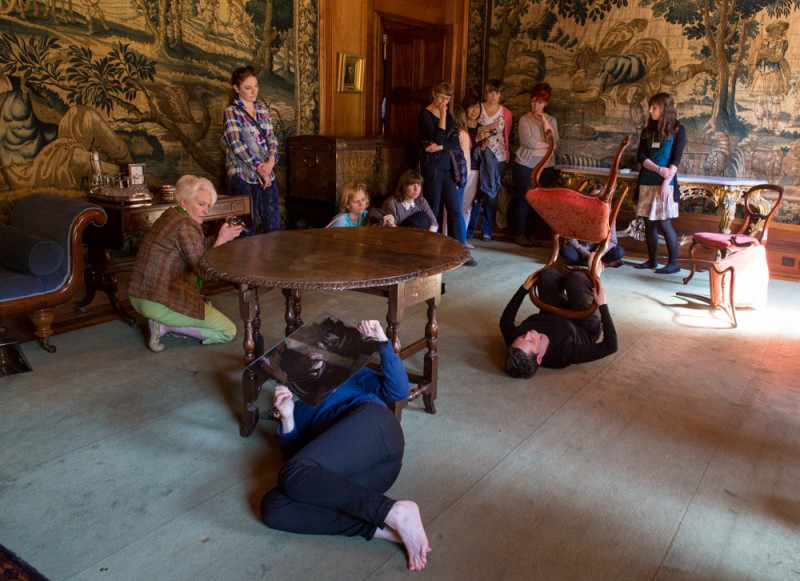 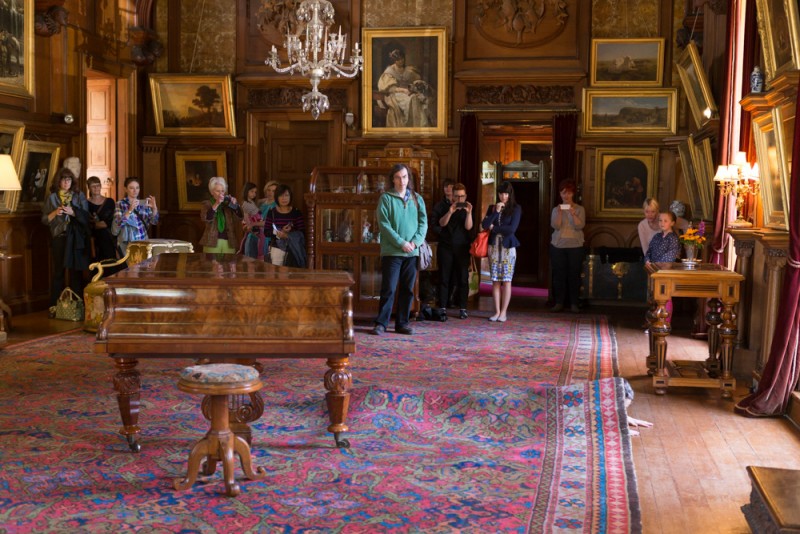 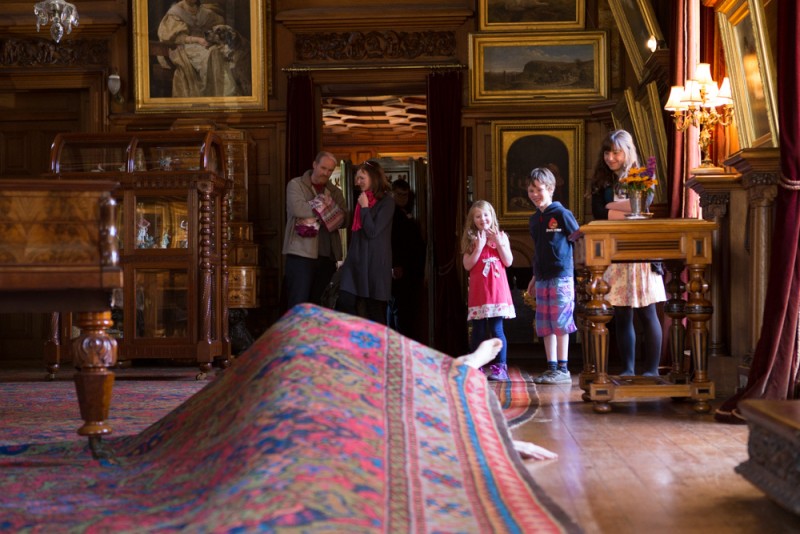 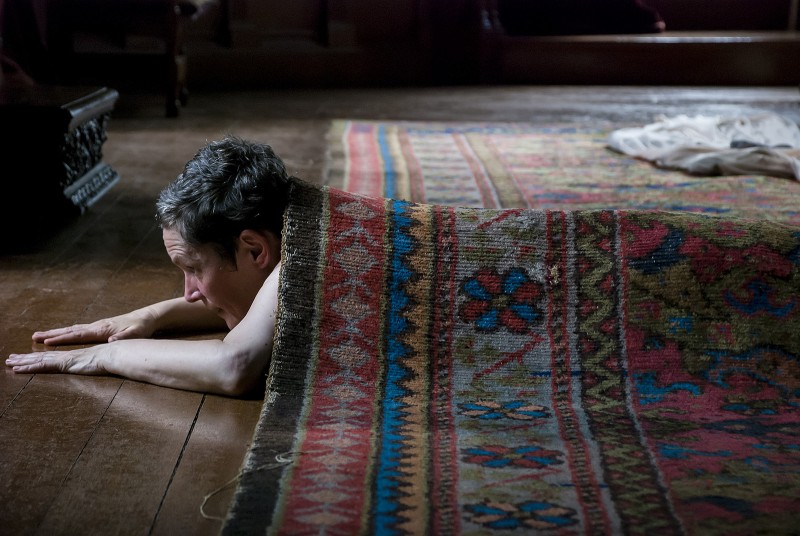 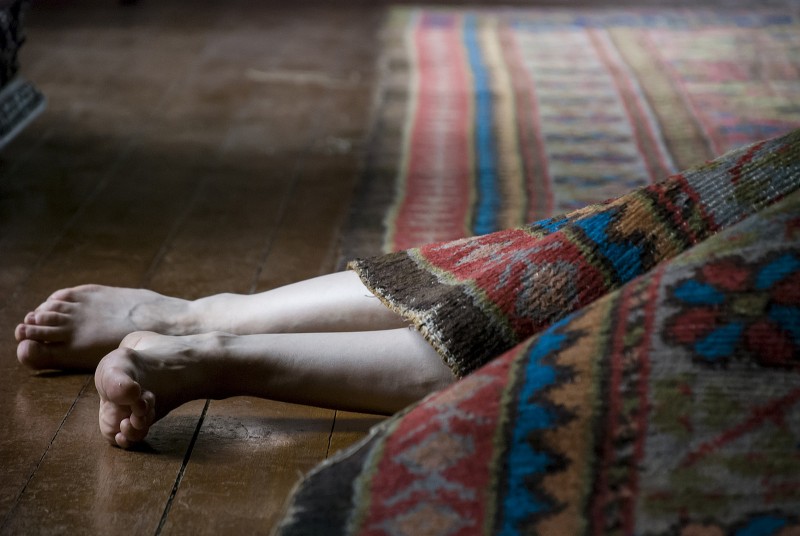 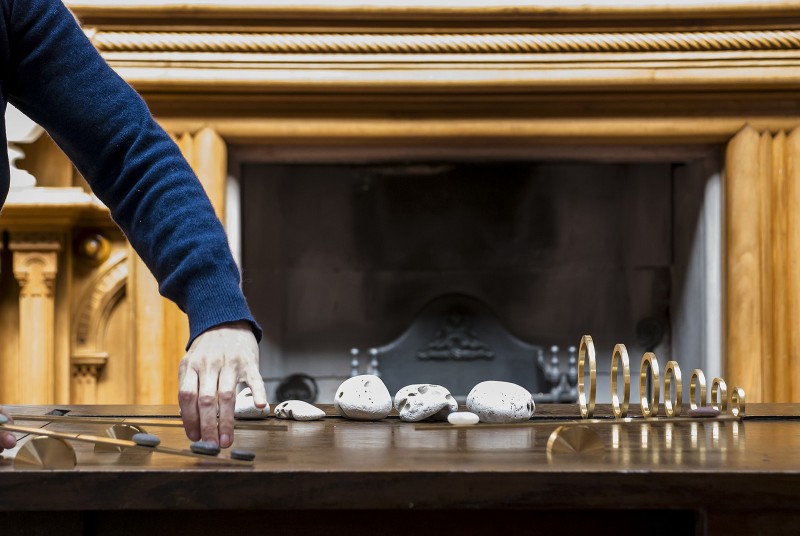 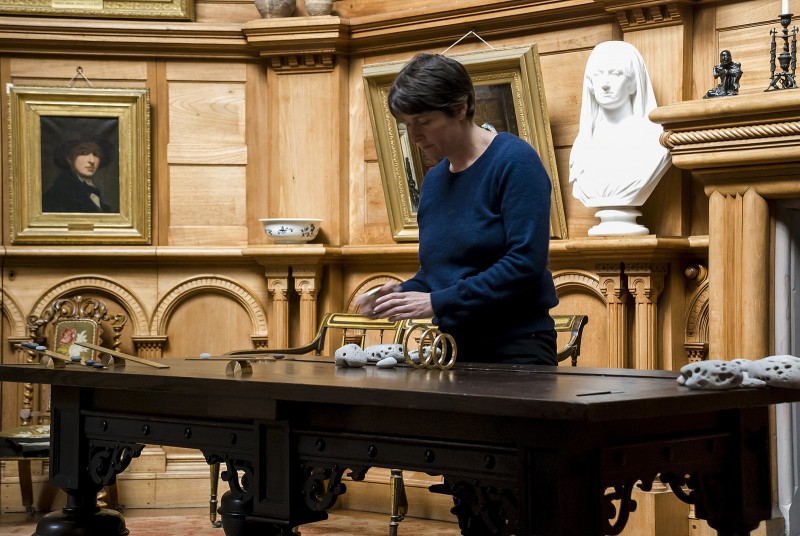 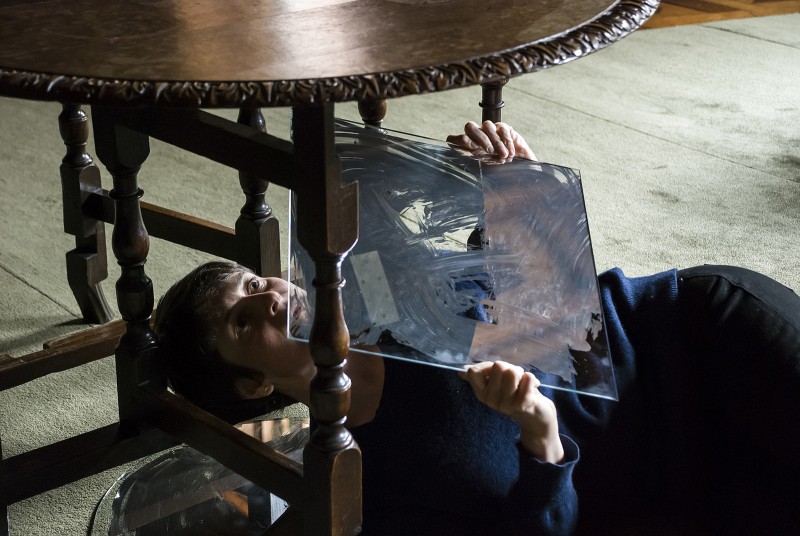 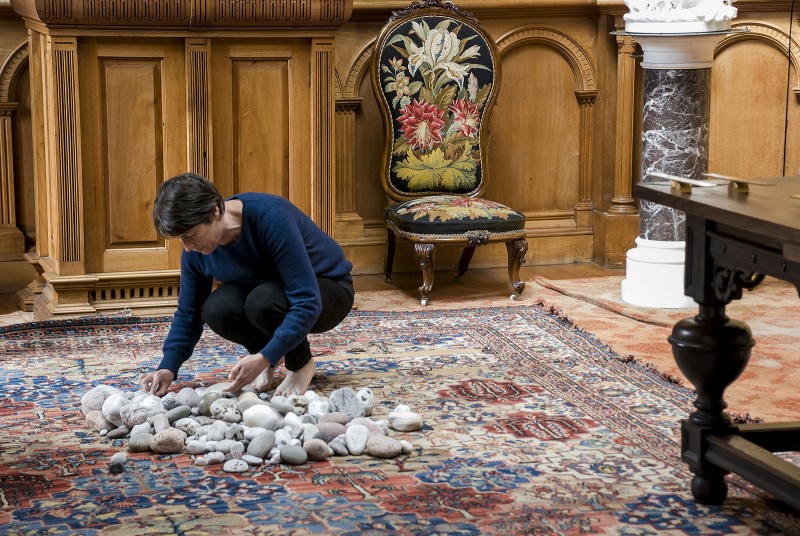 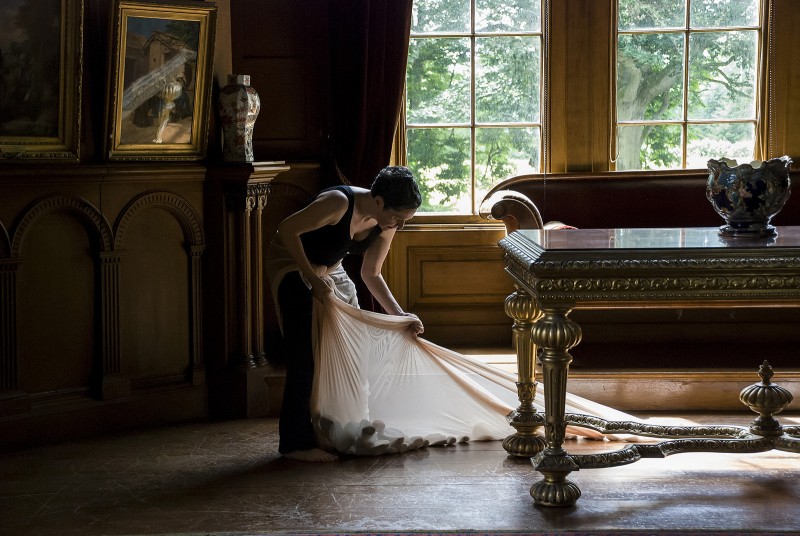 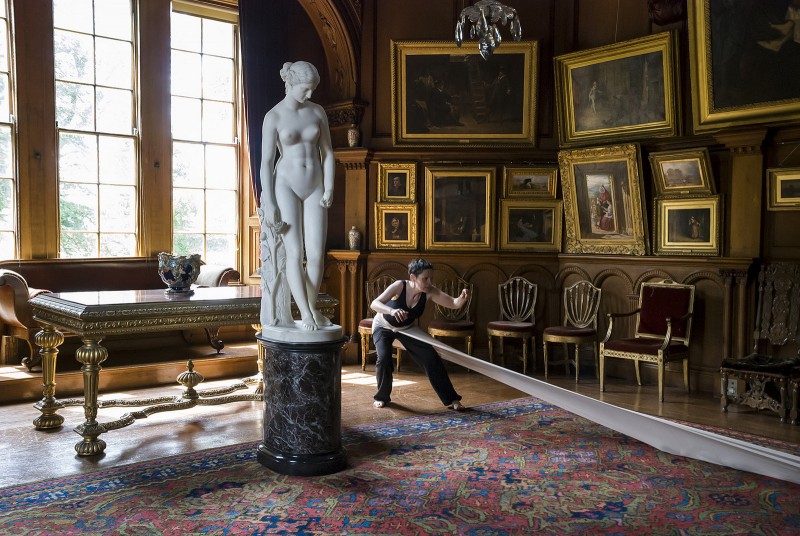 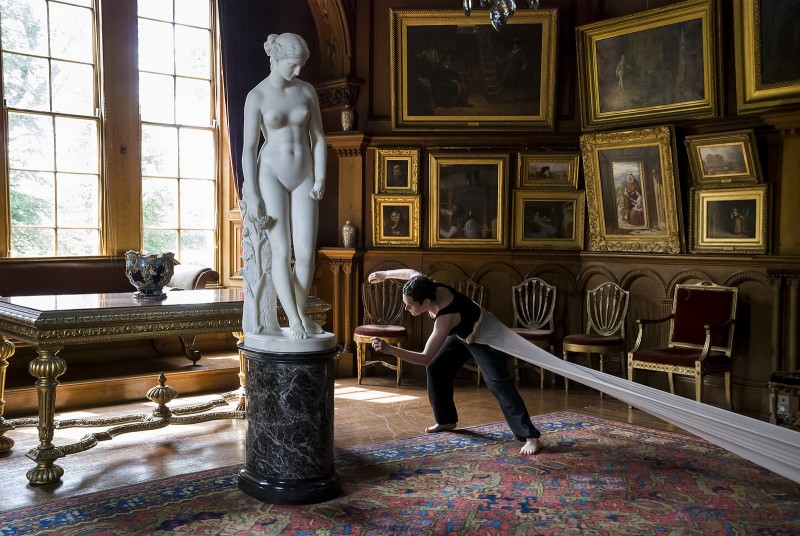 The invitation to Claire Barclay, who subsequently developed a collaboration with Janice Parker, came out of a focus on her existing practice and a work that she made at the Whitechapel Gallery in 2011, her first collaboration with dancers. The commission offered Barclay the opportunity to take the architecture and objects of this extraordinary space as a context, drawing a site specifity from this rather than the history of the site. Barclay and Parker used a series of mini-residencies in the spring of 2014 to develop the work at Hospitalfield. 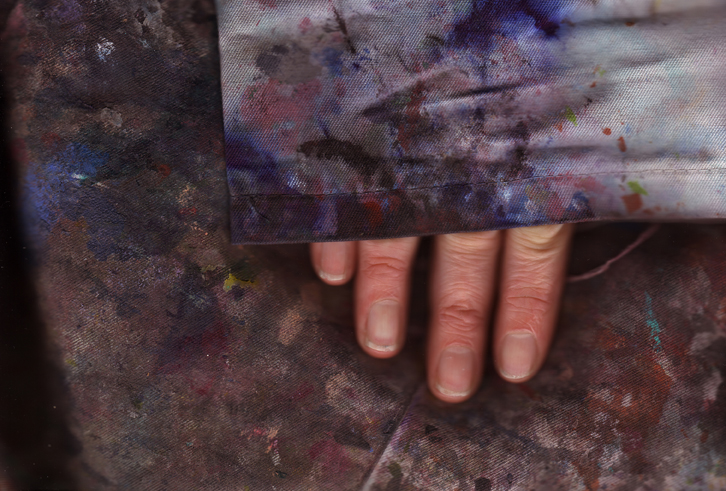 Jardine developed a piece of new writing, Let The Day Perish, which took inspiration from two ancient Angus churches, her interest being the medieval Doom paintings associated with both.

Fiona Jardine’s work, Let the Day Perish, is informed by peripatetic journeys around the Angus churches of Guthrie Aisle and Fowlis Easter and by a selection of texts from the Antiquarian’s library at Hospitalfield. The ancient church at Guthrie was once home to medieval ‘Doom’ paintings, and there has been speculation that painted panels of the Crucifixion for which Fowlis Easter is noted were produced by the same person. This speculative connection is the departure point for a poetic meditation on landscape, symbology and belonging that combines layers of personal and geographical fiction; myth and history. It is an investigation into the persistence and distinction of place and an enquiry into the possibilities of discovery through the abstract, impermanent, personal process of re-imagining.

The invitation to Jardine drew on another history and on the strong 20th century Angus tradition of poetry, particularly women writers such as Violet Jacob and Marion Angus.

The research for Fiona Jardine’s project was supported by The Elephant Trust.

This event was part of GENERATION – 25 Years of Contemporary Art in Scotland. GENERATION is a landmark series of exhibitions tracing the remarkable development of contemporary art in Scotland over the last 25 years. It will bring an ambitious and extensive programme of works of art by over 100 artists to over 60 galleries, exhibition spaces and venues the length and breadth of the nation between March – November 2014, with the majority of exhibitions taking place over the summer of 2014, as part of the Glasgow 2014 Cultural Programme.