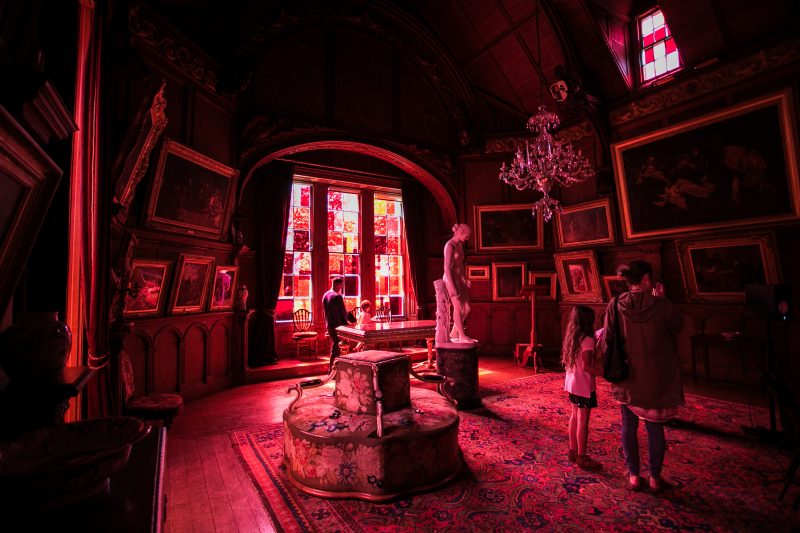 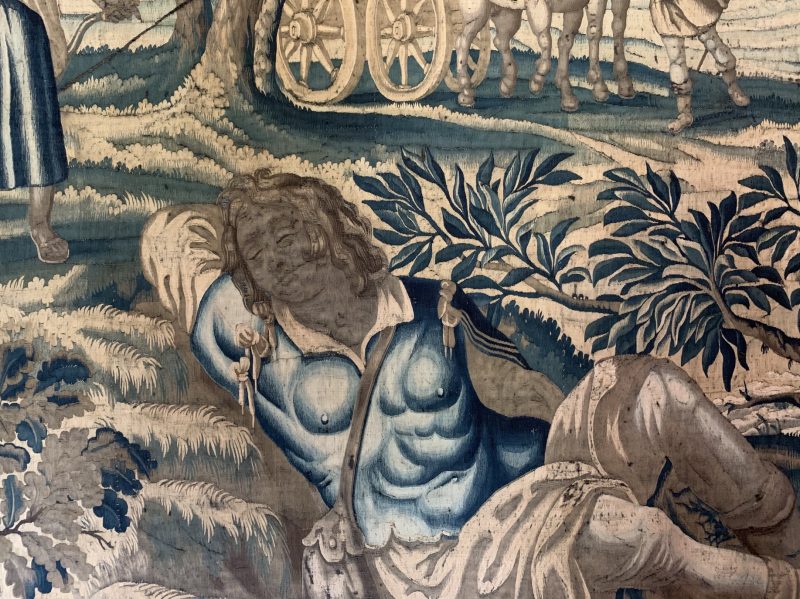 Happening on the very special weekend of the summer Solstice, Ways of Living, the title of the Summer Festival Open Weekend 2019, considers how we live in shared spaces, both physical and cultural.

The Free Drawing School was busy with workshops all weekend led by artist and illustrator Laura Darling. In the Paddock, Rachel Adams’ Hothouse  sparked another life with insects, grass and mycelia creeping in and growing up within.

Susannah Stark and Hussein Mitha collaborate on a new sound and light work entitled ‘Correspondences’. The sound installation of looping audio recordings includes samples from rave and pop music in the UK exploring rhythms of everyday life and text readings including a fantasy trial inspired by the rooms in which they are installed. The links the artists are making weave a broken narrative that responds to the influences and ideas presented through the history of the western enlightenment as it manifests itself at Hospitalfield. The spaces will be transformed through colouring the windows, capturing the longest days of sunlight of the year, and spreading a broken rainbow across the house. On Saturday evening at 5.30pm, Susannah Stark performed a live set of the music from the installation, drawing focus on a heightened sensory experience of voice. Listeners were invited into a sincere yet surreal soundscape orchestrated by voice and distorted percussion.

Vanessa da Silva is inspired by ideas of artistic culture in Brazil where she grew up, a culture celebrated for its mix of influences; from the indigenous way of life to the impact of colonization and global capitalism. In her new constructed textile work for Hospitalfield she appropriates symbols, colours and gestures of the three places that she has recently moved between, Sao Paulo Brazil, London and Arbroath. The work she has made, ‘Vertical Zen’ is developed from a cartography of signifiers to consider the idea of being ‘at home’. Through found materials and interconnected structures, she explores the ways in which people participate in society and present themselves to each other through garments, typography and support structures.

Images: Photography of Correspondences by Erika Stevenson.
Final image is detail of a 17th century Verdure Flemish Tapestry in the Drawing Room at Hospitalfield.

We are grateful for the support of the Elephant Trust toward the commission of Susannah Stark and Hussein Mitha’s art work Correspondences.

5pm: Live set of music performed by Susannah Stark in the Music Room

2-4pm: Free Drawing School Drop In workshop in the Greenhouse

Café open on Saturday and Sunday. Tea and cakes will be on offer all day and lunch is from 12-4pm. 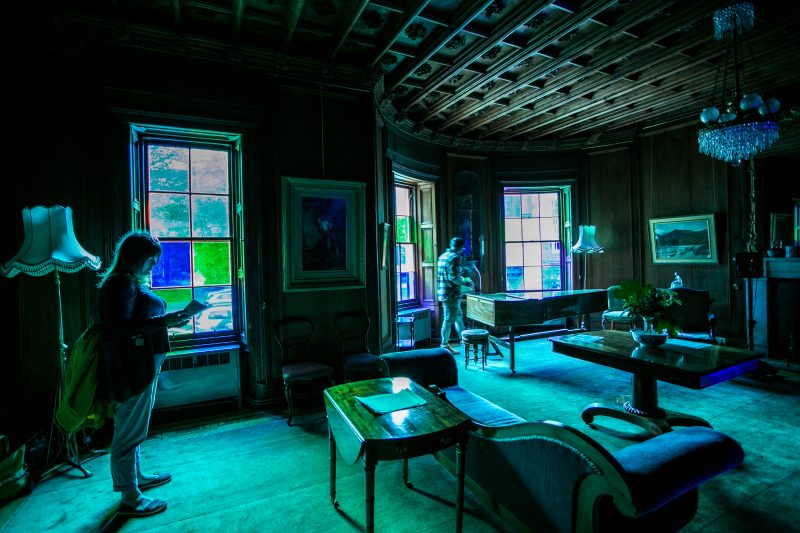 Susannah Stark’s work focusses on an ongoing exploration of the female voice and the ways it is heard and felt in public life. She makes music for live performance and is currently working on her first EP. Her installation works treat sound and voice as sculptural tools for exploring strategies of resistance and healing. She believes that there is a separation of body and mind in contemporary capitalism that is brought about through the influence of new technologies on emotions and actions.

Hussein Mitha is a writer and artist based in Glasgow whose artistic practice centres around history and political aesthetics, across mediums and forms such as text-installations, writing, sign-making, murals, public art and audio work. Recently their work has centred around researching colour theory in the west, interrogating the western subordination of colour as a category of experience, and the resistance this produced.

Recent visual work includes a collaborative mural-manifesto with Transmission Gallery (2019), a series of decals based on clauses from The Communist Manifesto (2018), and an ongoing vinyl-mural project, The Rainbow.

They studied at the University of Manchester and Universitat Autonoma Barcelona, and hold an MA in Comparative Literary Studies from Goldsmiths. They helped to establish Rattle Library, a resource for radical literature at Glasgow Autonomous Space. Recent writing has featured in Radical Philosophy journal, Map Magazine, and Brut Europe. Their piece for the latter, entitled Le Corbusier’s Rainbow, explores colour theory through Corbusier’s Unite d’habitation, against the backdrop of brutalist rainbows. 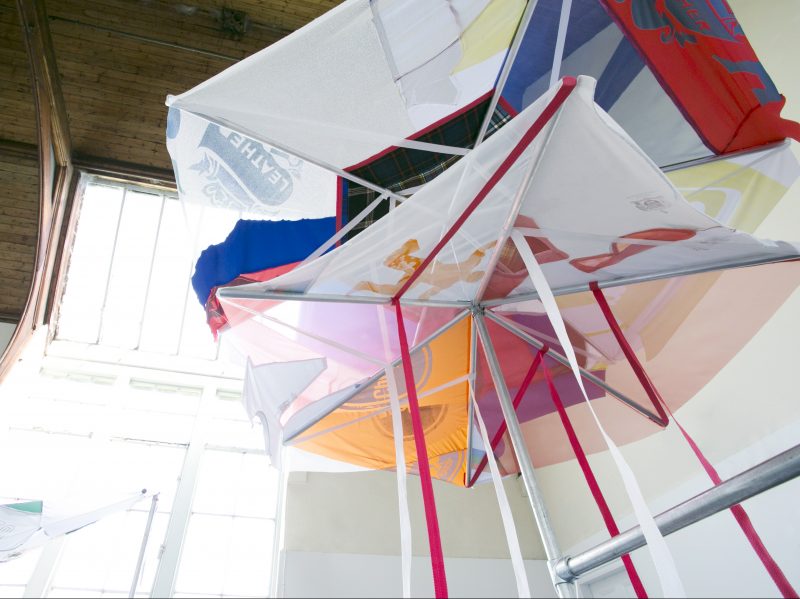 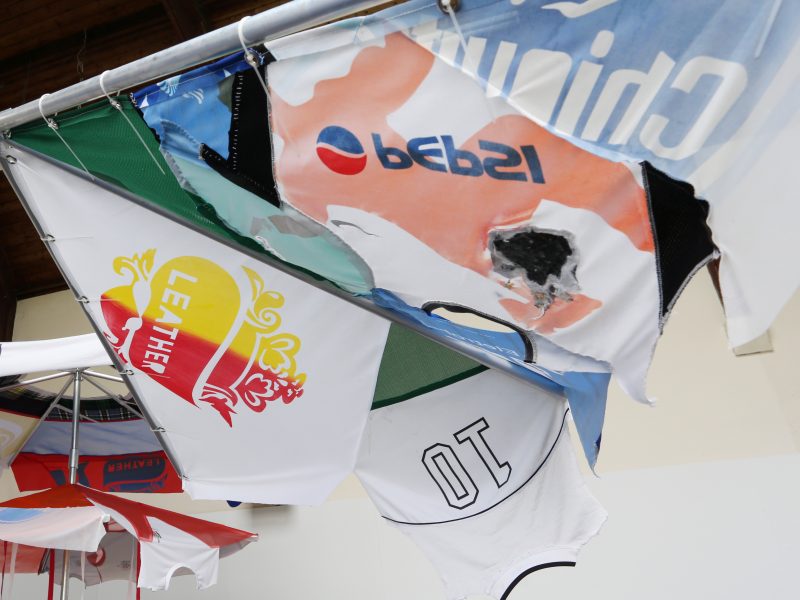 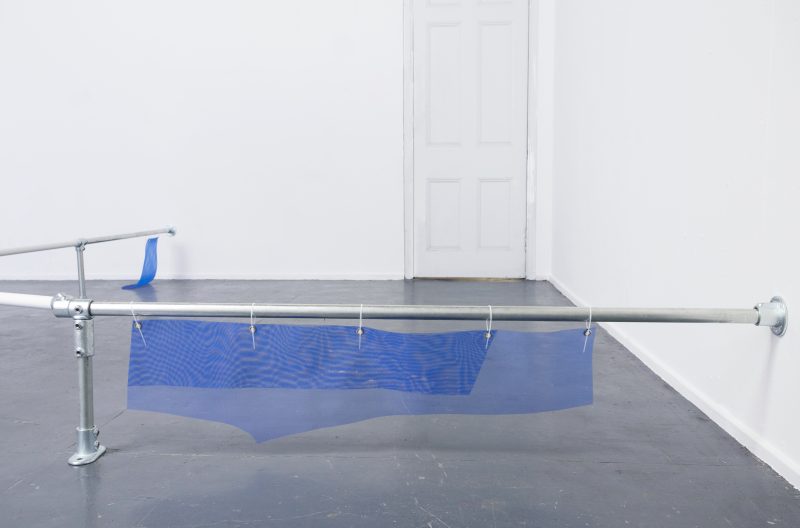 Vanessa da Silva was born in São Paulo, Brazil; she lives and works in London. Da Silva’s interdisciplinary process-based practice combines sculpture, textiles and performance focussing on issues of formation of identity, migration and displacement. Through the weaving of the personal and the political da Silva is interested to investigate the overlaying and fusion of histories and cultures that builds oneself.

The reality of growing up in São Paulo and moving to London in the early 2000s inform da Silva’s practice, she reflects upon her own lived experiences as a Latin American immigrant in Europe to reconstruct her own consciousness of Brazilian identity and otherness – da Silva is interested in the space between nationalities and the complicated borders where identities/ cultures mix and meet, where divergent and conflicting ideas cohabit.

She holds an MA Painting from the Royal College of Art, London, and a BFA in Product Design from FAAP Faculty of Fine Art, São Paulo, Brazil. In 2017 she was selected by Richard Wentworth for the Almacantar Studio Grant and was awarded the Fall Residency Program at Ox-Bow, USA. In 2019 Vanessa was part of a 3 month residency at Pivô Research, São Paulo, Brazil. 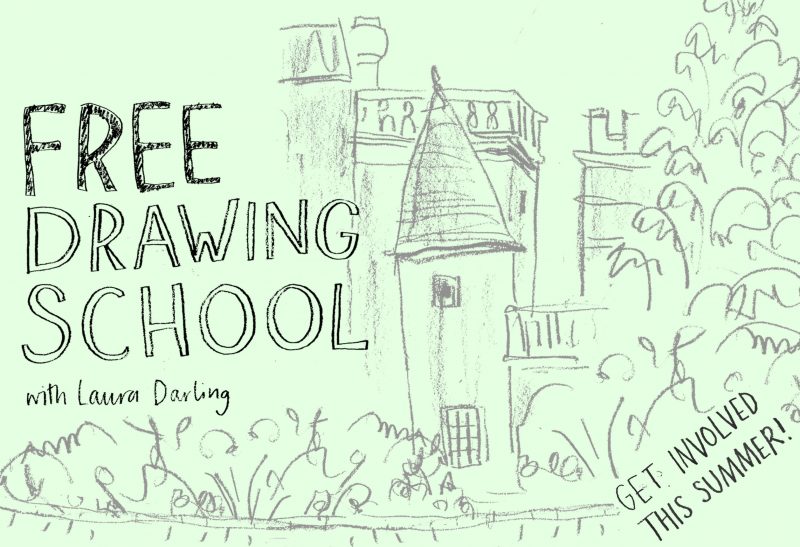 Laura Darling is an illustrator and artist based in Dundee. Her practice is underpinned by drawing, looking, noticing and recording visual details as a way of re-thinking our everyday surroundings. The subject matter she represents varies from animals and the natural world to people and built environments, often combined with hand-lettering. Primarily she uses pencil, ink and watercolours, combining traditional techniques with digital tools to produce playful illustrations.

Laura will be running regular, informal drawing classes and drop-in sessions. Free and open to all, attendees can discover experimental drawing techniques.

Laura is beginning her year leading the Free Drawing School by collaborating with dance artists Mark Bleakley and Katie Miller on the Procession with children from local schools Timmergreens and Muirfield on Monday 17 June in Arbroath. 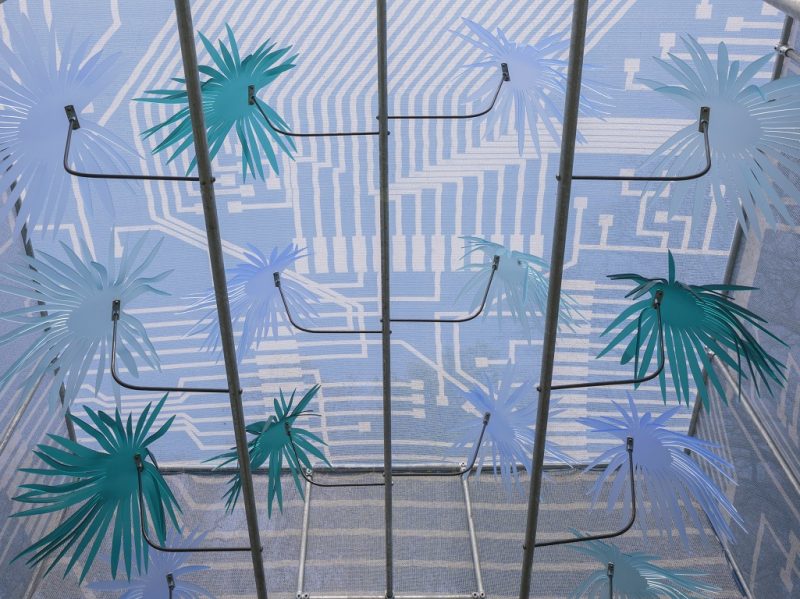 Rachel Adams (born Newcastle upon Tyne) lives and work in Glasgow. Her new work Hothouse is the 2019 Hospitalfield Sculpture Commission.

Working within creative, menial, domestic and administrative labour, Adams’ work considers the linked systems that govern the world. She observes the incomprehensible systems that detail the current shifts in society and technology, in dialogue with the environment and the natural world. Using sculpture, printmaking and textiles, Adams’ work uses the collapsing boundaries between natural and synthetic, hand-produced and machine-made, to consider the entangled relations of technology, labour and nature.

Recent exhibition include: Noon, David Dale Gallery, Glasgow; Lowlight, Bloc Projects, Sheffield; Right Twice a Day, Jerwood Visual Arts Project Space, London (all 2018). Adams was the Sainsbury’s Scholar at the British School at Rome 2015-16 and is a current AHRC Doctoral Researcher at the University of Edinburgh and Dundee Contemporary Arts. This year she will be exhibiting at Design Exhibition Scotland in Edinburgh and House for an Art Lover’s Studio Pavilion in Stoop Stooping is Stoopid with artist Tessa Lynch.

Lets Draw Together! Online with the Free Drawing School

Lets Draw Together! Online with the Free Drawing School 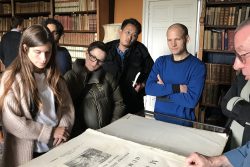