To conclude Graham Fagen's exhibition at Hospitalfield we have programmed an afternoon of talks. 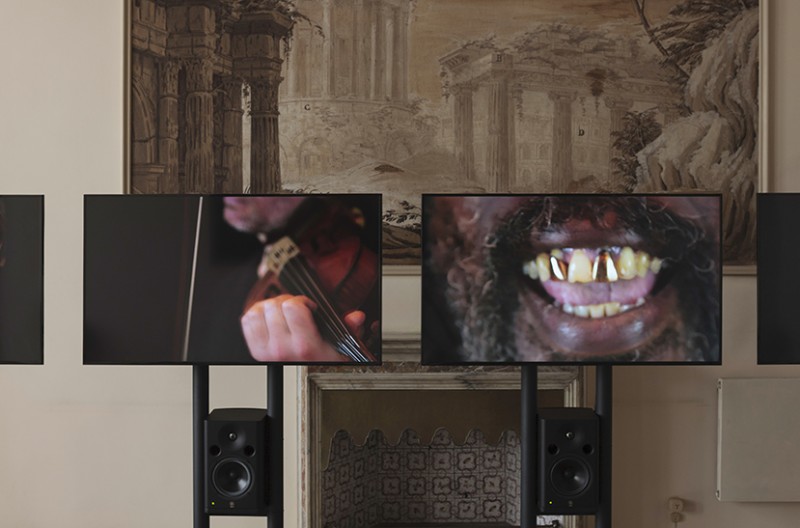 On Saturday 16 April, as Graham Fagen’s exhibition comes to a close, we will host a series of talks and discussions.

Key speakers are Dr Karen Salt from the School of Language and Literature, University of Aberdeen and Dr Michael Morris, lecturer in English and Cultural History at Liverpool John Moores University.

12.30pm Welcome and introduction to seminar

Over recent years historians have begun to uncover the extent to which Atlantic slavery underpinned Scotland’s economic and social life. This aspect, so long shrouded in silence and euphemism, has required ‘a revolution in native historiography’ in order to overturn a widespread ‘collective amnesia’ about the slavery past.

Michael Morris’ talk considers the dual role of the cultural sphere in the recovery of this memory. Writers, artists and critics are at least partly responsible for obscuring the significance of slavery and contributing to that amnesia. Yet art can also play a crucial role in bringing that past into focus in areas that the traditional tools of the historian can have more difficulty reaching. This talk therefore discusses Graham Fagen’s exhibition in the context of a growing stream of novels, poems, plays, exhibits, TV and radio documentaries, newspaper articles, public talks, historical walking tours and gigs which ask searching questions of Scotland’s imperial role. In the context of current debates around national identity, this historical and cultural reassessment can and should impact on Scotland’s future. 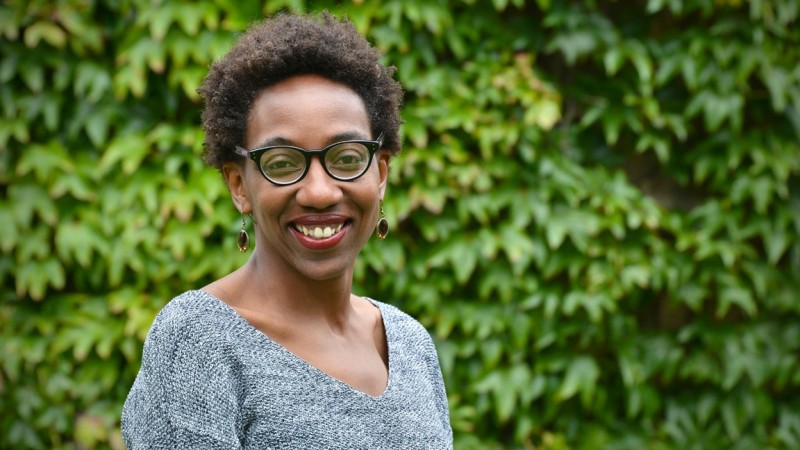 Karen Salt works at the School of Language and Literature at University of Aberdeen. Over the last twenty years has led research projects on social and health inequities, run non-profits, assisted national and international agencies in their crafting of materials on these issues and conducted community-based training. Returning to academia, Dr Salt channeled this work into a focused research programme on race, sovereignty, power and politics, with a particular emphasis on the interplay of these dynamics in the Caribbean and African diaspora.

Having recently moved to the University of Aberdeen, Karen Salt brings her expertise and interests to bear on Caribbean and African diaspora studies and works with a range of collaborators on the ways that power and racialized attitudes influence decision-making within societies. She is on the review panels for the European Research Council and the Arts and Humanities Research Council and is currently completing two book manuscripts: All Hail the Queen: Haiti, Black Sovereignty and the Power of Recognition in the Nineteenth-Century Atlantic World and Twilight Islands: Race and Politics Amidst the Caribbean Sea.

Nations in the Caribbean have mobilized a coordinated campaign for reparations over the long-used exploitative system of racial slavery by European nation-states and territories. Shifting the lens of reparations away from monetary payments, campaign organisers have increasingly argued for the role of bridge-building as a way to honestly engage with the past while building toward a new moral future. Scottish activists, third sector agencies and researchers have weighed in on this debate—some siding with the Caribbean calls for reparatory justice. Yet, people on all side note the role of and need for this public discussion—especially amidst continuous reverberations of Scotland’s own independence referendum.

Karen Salt’s talk will not tread into politics. Instead, it asks, more abstractly, how do we publicly navigate the political and racial tensions that emerge when we discuss past perceived harms amongst and within communities who still perceive these harms as reverberating into the present. Do we have spaces where free discussions can take place and no one historical viewpoint dominates? Can art facilitate that process of discovery and of finding common ground? Working with and alongside Graham Fagen’s exhibition, this talk considers the impacts of this type of historical and cultural exploring—and wonders, ultimately, if we are ready to deal with the many hauntings of our past. 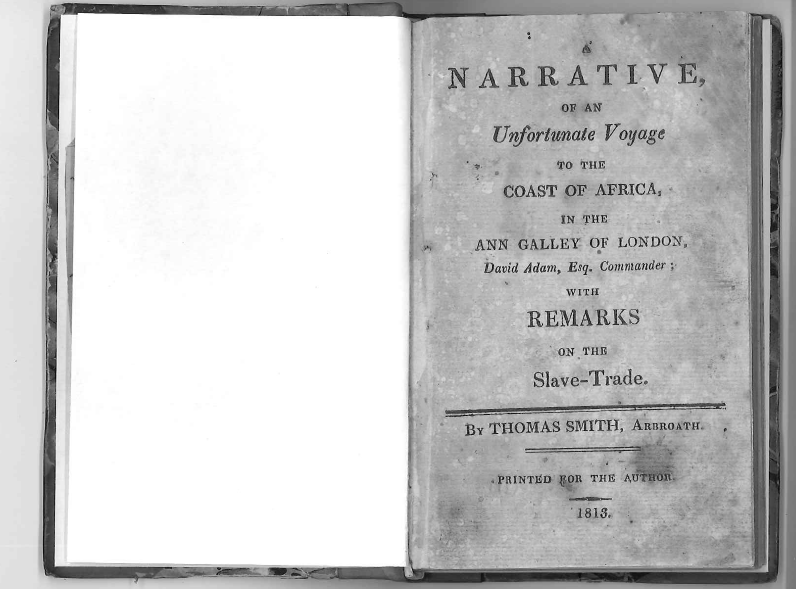 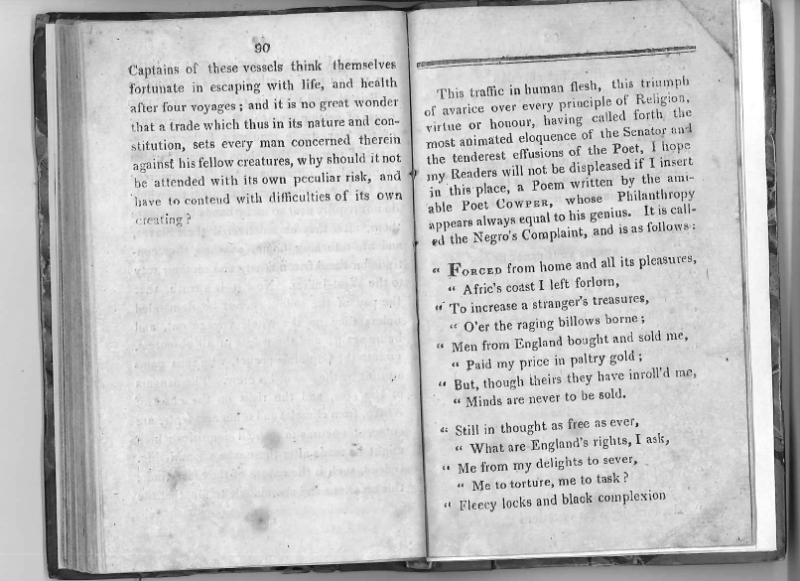 Hospitalfield are pleased to be working with The National Library of Scotland to bring a book from their collection to the seminar.

Narrative, of an unfortunate voyage to the coast of Africa was written by Thomas Smith ‘sailor from Arbroath’ and published locally in 1813 by John Findlay. The book recounts Smith’s journeys in detail and for the seminar, as a concrete object, can exist as a reminder that the slave trade was a part of life from the ports of Scotland.

Investigations into this book, introduced to us by one of our experiences volunteers, librarian Alasdair Sutherland, led to one of the quotes used by the author: a verse by English poet and hymnodist William Cowper entitled The Negro’s Complaint published in 1788. There are clear parallels with the poem The Slave’s Lament published by Burns in 1792.

Narrative, of an unfortunate voyage to the coast of Africa : in the Ann Galley of London, David Adam Esq. Commander; with remarks on the slave-trade. 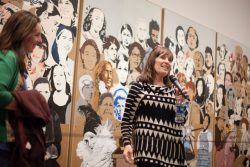 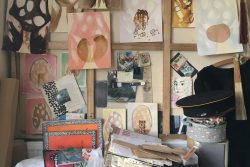 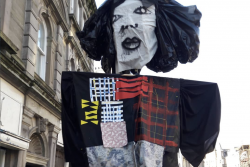 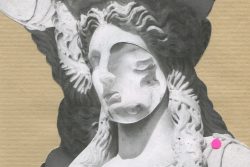