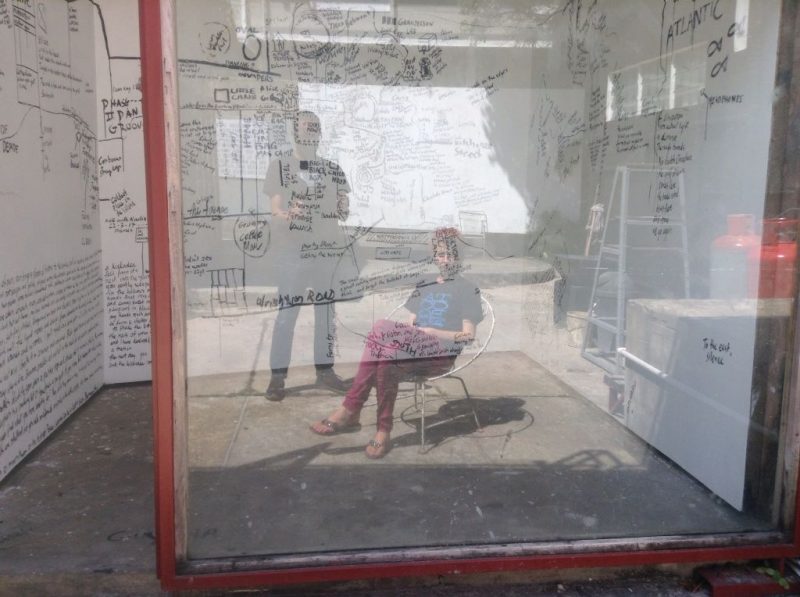 Artists and organisers were invited to hear contributions from artists who have recently been awarded international residencies supported by British Council and Hospitalfield and to take part in an open discussion with everyone attending about Dundee’s visual arts ecology.

What are the answers to encouraging artists to stay and be active in Dundee?

What’s the next step:

The event was organised as a partnership between Hospitalfield and the British Council. We are grateful to DCA for hosting the event.

The British Council and Hospitalfield share a joint aim to support the arts ecology of Scotland. In the last four years the two organisations have worked on several residencies which have brought international artists to the region and created opportunities for artists based in the DD postcode region to have residencies elsewhere.

Joanna Helfer undertook a residency at Alice Yard in Trinidad, supported by British Council and selected by the the Directors of Alice Yard, earlier in 2017. The TAARE project is a collaboration between British Council, Hospitalfield, Gas Works, Delfina, Autograph BP, Alice Yard and NLS Kingston.

Joanna Helfer graduated with a BA(Hons) in Time Based Art and Digital Film in 2009. The past 8 years of her professional work have primarily consisted of setting up and facilitating community arts initiatives in Dundee. These include Tin Roof – an artists’ collective serving the creative community of the city by providing collaborative opportunities, resources and space to make work, and Hot Chocolate Trust – a youth work charity working with marginalized young people. Alongside this her personal practice as a multidisciplinary artist comprises of filmmaking, photography, performance, sound art, printmaking and installation. She combine themes found in her community work with her personal practice, particularly in trying to uncover hidden or suppressed histories of people and places through performative exploration and creating relationship-based interactive experiences. Helfer is particularly inspired by the Situationist movement and the practice of the derive, using walking as a recurring methodology to provoke new work.

Camille Chedda is currently undertaking a two month residency at Hospitalfield within the TAARE project.

She was born in Manchester, Jamaica and graduated from the Edna Manley College with an Honours Diploma in Painting and received an MFA in Painting from the University of Massachusetts, Dartmouth. Her works have been featured in major exhibitions at the National Gallery of Jamaica including the Jamaica Biennial 2014 and New Roots,2013. She has also exhibited internationally in Boston, New York, Germany and China. She is the recipient of numerous awards including the Albert Huie Award, the Reed Foundation Scholarship and the inaugural Dawn Scott Memorial Award for an outstanding contribution to the Jamaica Biennial 2014. Chedda currently lectures in Painting at the Edna Manley College and Life Drawing at Utech.

Ranjeeta Kumari is currently undertaking a five week residency at Hospitalfield in a collaboration established following the British Council curatorial study trip to Mumbai in December 2016.

She did her BFA in Painting at College of Arts and Crafts Patna in 2008 and then shifted to Delhi for a junior fellowship by HRD government of India and an a Masters in Fine Arts at the Agra University. In 2016 she graduated with a MFA (Research Program) School of Humanities and Social Science, Shiv Nadar University.  Her final year graduate project Hashiya (Margin) shown at Kiran Nadar Museum, Noida. In 2014 she was part of And I laid traps for Troubadours a collaboration between Kadist Art Foundation, Paris & Clark House Initiative, Bombay. In 2012 she was part of Sarai Reader 09, a nine month exhibition at Devi Art Foundation curated by Raqs Media Collective. Her solo exhibition Labour of the Unseen – Sujani – Nihilism in the Craft was at Clark House Initiative in 2016. She was also part of River with a Thousand Holes, Clark House Initiative, Bombay, curated by Sumesh Sharma and text by Zasha Colah and Stories My Country Told Me, ACC, Gwangju, South Korea. She was born in Mokama, Bihar in 1983 and is now based in Bombay.

Sumesh Sharma cofounded the Clark House Initiative, a curatorial collaborative project located in an old office of the Thakur Shipping Company, Bombay in 2010. He is presently the curator there. The organisation has created residency accommodation within part of their building which also functions as a studio, meeting and exhibition space. Recently, he was invited to be the curator for the biennial of African contemporary art, Dak’Art 2016, in Senegal. Sharma’s practice deals with alternate histories that are informed by the Black Arts movement, socioeconomics, immigration in the Francophone, and vernacular equalities of Modernism. In October 2017, Sharma will curate a show on deconstructing modernism under the direction of Catherine David at the Centre Pompidou, Paris.