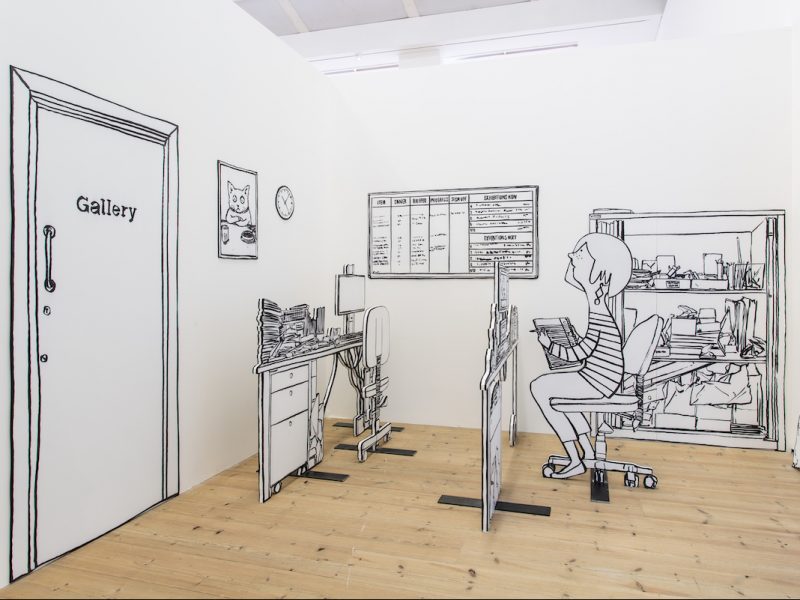 Hospitalfield are pleased to announce their artistic programme for 2021, including a series of new commissions starting in Spring to coincide with the opening of the new garden, freshly restored 19th century fernery and a glass house café, in April 2021, designed by Caruso St John.

Inspired by the complex rural context in which Hospitalfield is situated, the programme will take place mostly outdoors and the historic site will be activated by the newly commissioned contemporary art works.

New commissions initiated through Hospitalfield’s Studio Time programme include artists: Mick Peter, Jade Montserrat, Luke Pell, Hanna Tuulikki, Rehana Zaman and Sally Hackett.
The programme will launch with a new work by Mick Peter in Spring 2021 with further exhibitions, performances and screenings across the year. Exhibiting artists come from a broad range of positions, from those working with moving image, sound and performance to choreography illustration and sculpture.

A press launch and tour to see a major new outdoor commission by Mick Peter and the newly renovated spaces and planted garden is planned for Spring 2021.

Peter’s Gerroff! (or User Feedback) will be a series of scenes that create a narrative trail at Hospitalfield. The sculptures will address in a humorous way, the ‘rules’ of engagement with art. Peter’s playful installations often incorporate imagery influenced by newspaper cartoons and his sculptures appear as enlarged drawings, remarkable in their sculptural flatness, which wittily undermine the significance and authority of sculpture whilst at the same time being an affectionate nod to this tradition. His work has most recently been seen in a major solo exhibition at BALTIC Centre for Contemporary Art. Gerroff! (or User Feedback) is the Hospitalfield Annual Sculpture Commission for 2021. At Hospitalfield the works will be experienced in Hospitalfield’s grounds.

The Studio Time commissioning model has been devised to address the issues that have emerged from this time as we see artists under such pressure. This is one of a number of models that are likely to emerge as organisations take a new view on how they work with artists to make new work.

Some of the artists included in the 2021 programme will be seen in Scotland for the first time when exhibited at Hospitalfield. Others, like Hanna Tuulikki are making brand new responses to the coastal and rural contexts of Angus in which Hospitalfield is situated. Public dates will be announced soon.

In June, Hospitalfield will also open The Judges lll; a vast work by Christina Mackie, held in the collection of Nottingham Castle Museum and Art Gallery. Originally made in 2013 to be installed within the Museum’s picture galleries, Mackie will install the work afresh in the Hospitalfield vast 19th century Picture Gallery, where it will be seen in Scotland for the first time.

As the first commissions launch in Spring 2021, this will be the first time visitors can experience the newly developed site at Hospitalfield, including the walled garden designed by Nigel Dunnett (Olympic Park, Barbican Gardens) and glass house cafe and fernery designed by Caruso St John architects.

A new publication and major outcome of the Free Drawing School will also launch; a graphic novel drawn and written by the illustrator Laura Darling. Hilariously describing 800 years of the history of the Hospitalfield gardens, from the plague to the pandemic and lots in between, this is a wonderful outcome from Darling’s year long residency running the Free Drawing School at Hospitalfield.

Artist Jade Montserrat said, “I am delighted to be working with Hospitalfield on a new commission following my residency in 2017 and collaboration with Hospitalfield on the Free Drawing School Online in Summer 2020. Support for artists to continue to create and to show artwork during this time is vital.”

Artist Hanna Tuulikki said, “Hospitalfield is an inspirational place to spend time, to think and to make. I have been taking part in night time bat walks to create a new live performance work: Echo in the Dark, which will tune into more-than-human rhythms and frequencies, to explore the interconnections of bat echolocation and embodied dance music as a model for ecological coexistence.”

Lucy Byatt, Director, Hospitalfield, said, “We are pleased to announce our artistic programme for 2021 launching at an important moment in our history. Opening the first phase of our Future Plan – a reimagining of some of our most important designed landscape and buildings; the redesign of the walled garden and garden buildings. This attentiveness to horticulture, along with our rural and coastal setting provides many of the starting points for our programme.”

She added, “It has never been so critical for arts organisations to find ways to continue to facilitate space and time for artists to develop new work. I very much look forward to welcoming old friends and new to Arbroath this spring and to see the first of our commissioned projects for the year ahead and to explore this beautiful region of Angus.”

Hospitalfield’s plans for the future:

Caruso St John’s master plan for Hospitalfield, commissioned in 2014 includes three phases of development. Phase 1 is opening in April and phase 2 will progress in early 2021. This phase will include a new building that will increase the residential facilities on the campus, restore the existing 19th and early 20th century artist studios and the development of a new 21st century studio. A further phase 3 will include the renovation of the historic house and new study centre that will hold the archive, collections and gallery.

Hospitalfield, originally the site of a medieval hospital that supported pilgrims making their way to Arbroath Abbey, is now the site of one of Scotland’s most important Arts and Crafts country houses. Located 15 miles north of Dundee and just to the south of Arbroath in rural Angus, Hospitalfield has a fine view overlooking the North Sea. The house as it exists today was the vision of the 19th century artist Patrick Allan-Fraser and his wife Elizabeth. Between 1843 and 1890 they created their alluring and highly crafted building that they intended as their legacy to support artists of the future. From 1901, following Patrick’s death, Hospitalfield opened as a residential art school, described by the then Trust as ‘the great experiment’ the rural art school flourished for two decades before being restructured. From 1938, through close affiliation with the four Scottish art schools in Dundee, Edinburgh, Aberdeen and Glasgow, Hospitalfield became a post graduate school and a meeting point for many generations of artists, teachers and art students from across Scotland and beyond. A meeting point is what it remains today yet the programmes are structured to meet the needs of artists and audiences in a very different context in the 21st century. Still focused on the fragility of artists just as they leave art school, an opportunity for recent graduates of Scottish Universities will be announced later in December 2020.

Since 2012, Hospitalfield has been led by Director Lucy Byatt, who, along with her team, is moving forward ambitious plans to build a bright and exciting future for the site, through the forthcoming capital investment and an ambitious contemporary art programme. Exhibitions or commissions since 2012 have included those with Rachel Adams, Graham Fagan, Claire Barclay, Tamara Henderson, Lubaina Himid, France-Lise McGurn and Sekai Machache. At the core of the programme is the internationally respected residency programme, with previous residents including Adam Benmakhlouf, Dineo Seshee Bopape, Chris Fite-Wassilak, Jade Montserrat, Cinzia Mutigli, Ima Abasi Okon, Susannah Stark, Patrick Staff, Hardeep Pandhal, Kate V Robertson, Gil Leung, Charlotte Prodger and Alberta Whittle. Hospitalifield also hosts teaching and workshops, including the Free Drawing School, and continues to develop its own art collection.

Regular events such as walks, talks, planting and seasonal events and projects take place with schools and local communities. Hospitalfield is the lead partner for the Angus Place Partnership.