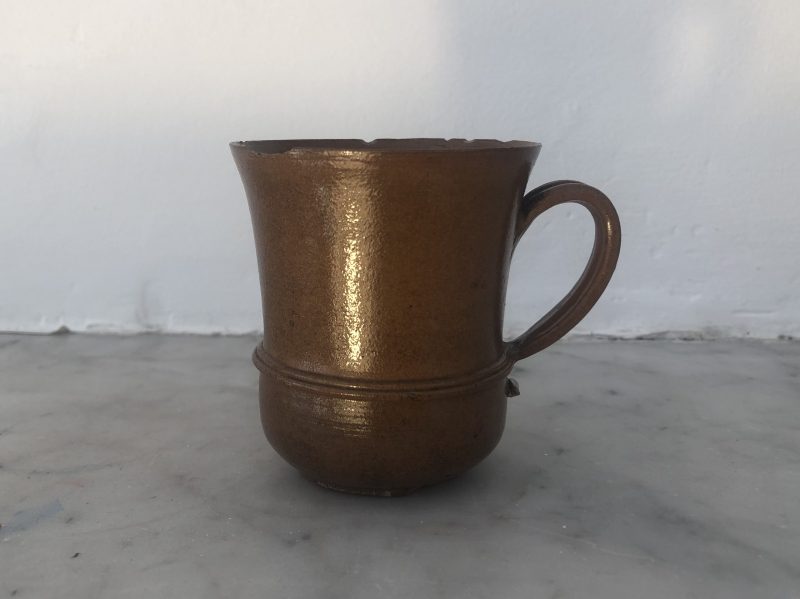 Artist Francis Place (1647-1728) made paintings, prints and ceramics. This cup is one of three that were in the collection at Hospitalfield, the other two were sold by the Trust to major national collections in 1931. This is a rare example, not just because of its age, it is around 330 years old, but also because Place only made a very few.

This cup found its way in to the collections at Hospitalfield through the maternal ancestral line of Elizabeth Fraser and forms part of a collection of drawings, prints, paintings and archive material that were listed as the contents of Place’s ‘painting room’ in York. The descendants of Place managed to retain this ‘capsule’ collection which found its way from Elizabeth Fraser’s Uncle’s house, Hawksbury Hall in Warwickshire, to Hospitalfield in around 1843.

From his base in York experimenting with materials and processes, ceramics was only a fleeting part of this pioneering artist’s work. The sales made by the Trust to raise funds at a difficult time resulted in items of Place’s work from Hospitalfield dispersed to public collections in Britain and America, including Tate, the V&A Museum and the British Museum

Although the totality of these items is now impossible to visualise together, important work has been undertaken recently by Helen Pierce of the School of Art History at the University of Aberdeen that vividly illuminates the contents of Place’s ‘painting room’ and expands our knowledge of his work. Published in the Journal of the History of Collections, Pierce has also transcribed early 18th-century notebooks held at Hospitalfield that were compiled by the descendants of Francis Place and provide a catalogue of the works bequeathed by Place to his wife and family.

Place was an innovator, inspired by the intense interest in art, science and natural philosophy that flourished during the period. Through his friendship with the Czech artist Wenceslaus Hollar (1607-1677), he became one of the first British artists to employ the use of newly discovered art of mezzotinting to produce prints. He closely followed the potter John Dwight as one of the early pioneers of an experimental ceramic method producing a characteristic marbled stoneware pottery. The alchemy of this particular process must have appealed to the mind of a natural philosopher with such wide-ranging interests.

Place was largely self-taught and considered himself as an amateur artist, although his skills are those of a professional. The antiquarian George Vertue (1685-1786) considered Place to be a pupil of Hollar, however Place states in a letter to Vertue that ‘Hollar was a person I was intimately acquainted with but never his disciple nor anybody else, which was my misfortune’ confirming his status as an amateur. In any case, Place and Hollar clearly built a close association, sharing an interest in ornithological and topographical subject matter and innovative printmaking techniques.

Wenceslaus Hollar gained international fame as the first to produce a record of the city of London following the Great Fire of 1666, held at the British Library. It was earlier in the same year that Hollar had made etched examples of a series of grotesque heads drawn by Place in the manner of Leonardo da Vinci. The young Place had established a friendship with Wenceslaus Hollar shortly after his arrival in London to study law at Gray’s Inn following the wishes of his family. The legal profession was not ultimately to be enlightened by the mind of Place however who pursed his artistic interests.

John Dwight (1633-1703) is celebrated in ceramic history for his numerous innovations in the field, gaining early British patents for porcelain. The pioneer potter established the ambitious Fulham Pottery, producing salt-glazed stoneware at scale. Dwight made records of his recipes for porcelain, including the following notes for the production of the marbled stoneware:

It is not known if Place knew Dwight personally, however it is likely that he knew and admired his stoneware. It was shortly after his marriage to Anna Wilkinson in 1693 that Place settled in York to pursue a short-lived career as a potter where he produced a line of marbled stoneware listed as ‘Place’s Ware’, including the cup held at Hospitalfield.

It was in York that Francis Place became associated with a fraternity of antiquarians who became known as the York Virtuosi. The group held a lively interest in art, science and natural philosophy and made a significant contribution to the intellectual life of the city. The Virtuosi included Place’s great friend the printmaker William Lodge and the naturalist and physician Martin Lister for whose scientific publications Place contributed etchings.

There is so much packed in to the story of a small, brown, delicately thrown cup.